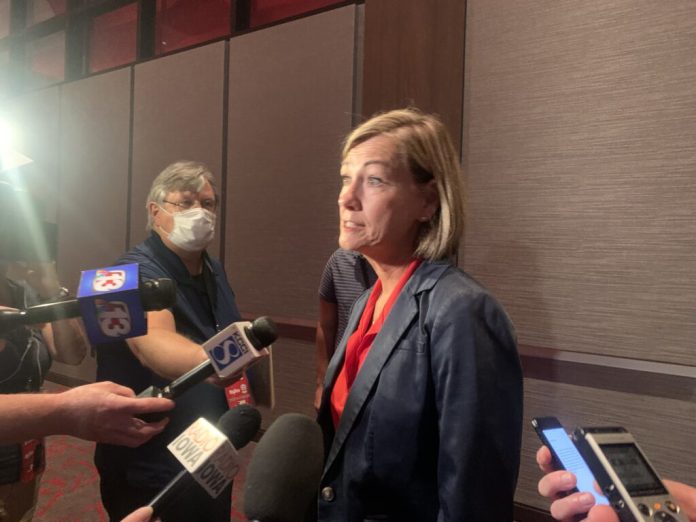 Lawyers for Gov. Kim Reynolds are arguing in court that she was too busy to respond quickly to public-records requests this year due to the pandemic, and that her decision-making process is shielded from disclosure by executive privilege.

The governor’s office has made those arguments in recent weeks as part of an effort to dispose of two lawsuits alleging she and her staff have violated the Iowa Open Records Law.

In addition to asserting executive privilege, the governor’s office is arguing that the lawsuits, filed in Polk County District Court, have been rendered moot because the documents requested of her office were disclosed five months later once the lawsuits were filed.

Lawyers for the plaintiff argue that delay constitutes a violation of the Iowa Open Records Law for which the governor must be held accountable.

“Just as a thief does not moot his case by returning the stolen property, a violator who refuses to produce public records in a timely fashion cannot moot a lawsuit by producing the records on the eve of trial,” the plaintiff’s lawyers argue in a brief filed with the court.

The litigation stems from a set of public-records requests Utah attorney Suzette Rasmussen filed with Reynolds’ office in March, asking for all correspondence regarding the state’s contracts with Nomi Health for COVID-19 testing.

By mid-August, the governor’s office had yet to turn over any of the records and Rasmussen went to court, filing two separate lawsuits, each pertaining to one of the two requests.

On Sept. 2, after the lawsuits were filed, Boal turned over what he said were all the requested public records, and lawyers for the governor filed motions to dismiss the lawsuits, claiming they were now moot since the records had been provided.

In arguing for a dismissal, the governor’s lawyers also asserted that the lawsuit could lead to public disclosure of Reynolds’ decision-making process and her communications, which, they claimed, are protected by executive privilege, which shields from public disclosure certain forms of communication involving presidents, governors and other executive branch officials.

If the lawsuit were to proceed, Reynolds’ lawyers told the court, a judge “would need substantial details about what the governor and her staff were spending their time doing in relation to the time on Rasmussen’s request and why the governor decided to allocate her staff resources in that way.” As a result, “the governor and her staff would be forced to put forth” information about her decision-making process and her communications, both of which are protected by executive privilege and “should generally be kept confidential,” the lawyers argued.

Rasmussen’s lawyers dispute that claim, saying the courts have said executive privilege can be claimed only in attempting to keep confidential certain communications and does not provide “a grant of immunity from suit.”

In support of their argument, Rasmussen’s lawyers state that on Jan. 7 of this year, in a recorded interview with the Iowa Capitol Press Association’s president, Erin Murphy, Reynolds “acknowledged her past failure to respond timely to open-records requests and made a commitment to responding in a timely manner going forward.”

Lawyers for Reynolds say the timeliness of the governor’s response to public-records requests shouldn’t be an issue for the court since Iowa’s Open Records Law “contains no hard deadline for responding to a records request.”

Although they acknowledge that the Iowa Supreme Court has held that “substantial” delays in producing records may constitute a “refusal” to comply with the law, Reynolds’ lawyers argue that “all of this occurred during an unprecedented public health disaster,” at a time when Reynolds “was not just directing the state’s response to the pandemic and economic recovery, but also managing all state government.”

A hearing date on the motions to dismiss has yet to be scheduled.

Rasmussen also is suing the Iowa Department of Public Health and its spokesperson, Sarah Ekstrand, over a public-records request directed to that agency in March. As with the requests made to the governor’s office, the records from IDPH were turned over only after the lawsuit was filed.

A hearing in that case is scheduled for Jan. 14, at which point the court will consider the motion to dismiss.

Rasmussen has sued the governor of Utah, Spencer Cox, for allegedly delaying access to records tied to Utah’s COVID-19 response. That lawsuit, filed July 2, alleges that the open-records requests Rasmussen filed between mid-March and mid-May are still unfulfilled.

Rasmussen told the Salt Lake Tribune she has filed the lawsuits on behalf of a client, Paul Huntsman of Utah, who is backing a multi-state effort to access government records related to COVID-19. Huntsman is the brother of Jon Huntsman Jr., whom Cox defeated in last year’s Republican primary.