Ila Plasencia learned to pitch from her brother, a talented baseball player. Soon, she became pitcher for her grade school softball team, and those experiences guided her for the rest of her life. “If you are in sports, you know how to work as a team and how to be a leader,” said Ila. Ila Plasencia was a leader both on and off the softball diamond.

My father came as a young boy during the revolution. He came to the United States because, as he would tell me, the federalistas would come along and they would want to take all the young kids. His mother would hide him and his cousins so they wouldn’t have to go with them…[My father] was a jack of all trades. He could do anything. He built us some benches….a bench for each one of us. I remember very clearly, we would all get our bench in the evening and lay there. This is in the summer, of course. Lay there and we’d look at the stars.

…My mother died when I was very small, five years old. I didn’t really know my mother because she was always confined to a hospital because she had tuberculosis. In those years you couldn’t get near the children because it was a contagious disease. We couldn’t see her except through the hospital window.

World War II, Ila remembered, “wiped out” her family—her sister died from a ruptured appendix, and the Pacific War claimed her older brothers. Ila and her father moved to Valley Junction, now part of West Des Moines. In Valley Junction, she felt like “an outsider”—the white community disliked Mexicans on principle, yet the established Mexican community did not welcome her with open arms. “It was kind of a blow,” she recalled, “because…they didn’t look at you as any piece of value.”

After high school, Ila worked as a typist. She married Ralph Plasencia in 1949. Although she quit working when her children were small, she soon returned to work as an administrative assistant with the U.S. Marshals Service office. There, her job was to ensure that employers adequately paid their workers. “It was a very gratifying job,” Ila said. “I was able to recover wages for a lot of people.” The work took her back to the same cement company where her father had worked and she found her father’s employment records while investigating the Portland Cement Company. She later worked as a compliance officer for the U.S. Department of Labor until she retired in 1985.

Ila also returned to her beloved softball, this time as a coach:

I was president of the West Des Moines Girls Softball Association. I coached. I managed…I had a ball team of all Latinas that played with the Y here in Des Moines. I have still here the little medals we won. We went two years in those leagues and we did win…I had also formed a bowling league of all Latinas out at Val Lanes…we had that for about five years. Then after that I always seemed to be organized.

IN 1957, Ila served as the first president and a founding member of the Des Moines League of United Latin American Citizens Ladies’ Council 306.  In 1986, she was elected Iowa state director of LULAC—the first woman to hold the office. The next year, she held the elected position of LULAC National Vice-President for the Midwest.  During her tenure, she led and coordinated regional LULAC efforts across the twelve-state region. She used her LULAC connections to establish Midwest Education, an organization that offered free classes to the Latino community. She served as secretary for Iowa Governor Robert Ray’s Spanish Speaking Task Force. Its final report, Conóceme en Iowa, led to the formation of the Iowa Spanish Speaking Peoples Commission, later known as the Iowa Commission on Latino Affairs. Ila reflected on a lifetime of public service:

“I’ve been on a lot of commissions. I’ve served on a lot of boards. I think that in my lifetime while here in Iowa and Des Moines, we—and I say we, because I couldn’t do it alone—in LULAC, in Midwest Education, we’ve made some changes. And I think that they were good. . . . My life has been an adventure and I’ve loved every minute of it.” 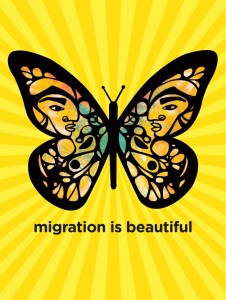 This article is courtesy of the new website called “Migration is Beautiful”.

This website was developed from the Mujeres Latinas Project, started in 2005 at the Iowa Women’s Archives to collect and preserve primary source materials about the history of Latinas and their families in Iowa.

Visit this new website and see the history of migration of Latinos in Iowa starting from 1850.