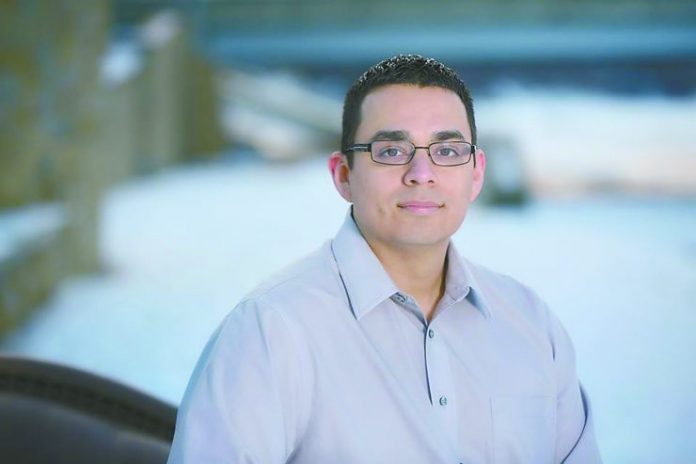 He is the first Latino to be elected to be the mayor of Dixon, IL. His background is impressive and includes two combat tours to Iraq and co-ownership of 4 small businesses. Liandro “Li” Arellano Jr is far from being an average civil servant. Not only did the residents of Dixon reelected Arellano for a second term this spring, but he also reenlisted and will be serving his country and performing his mayoral duties at the same time.

Mayor Arellano was born in Fond Du Lac, WI. He is a third-generation American. His grandfather is from Mexico and his mother’s family were German Catholic farmers.

“Both my father and grandfather were pastors; in fact, my grandfather translated sermons into Spanish for his fellow migrant workers,” Mayor Arellano shared a little about his father’s side of the family.

When Mr. Arellano was 7 years old, his family moved to Grand Detour, a village outside of Dixon, where his father became a pastor at Faith Assembly of Grand Detour. Mr. Arellano attended Faith Christian Academy in Grand Detour. While joining the military was something he thought about seriously, he chose to get a degree first. After graduating from High School, Mr. Arellano entered the University of Michigan, but he did not finish his studies.

“I left before finishing my degree; first to join the military, and then again to open up my business back here in Dixon,” Mayor Arellano explained why he is not a graduate of the University of Michigan by now.

After the 9/11 attacks, like many young men of that time, Mr. Arellano felt a strong sense of duty to serve his country. In 2003 the war with Iraq started and this same year Arellano decided to enlist in the Army. In 2005 he married his high school sweetheart, Jamie and went to his first combat tour in Iraq.

“The military can certainly take a toll on a family; for my first two tours I did not yet have children,” Mr. Arellano shared how hard it is to be a soldier and a newlywed. “My wife was with me for both of my first tours, and she has always been a rock of support. We often used video chat and online messenger service to stay in touch, and phone calls help as well.”

He came home safe and sound after his first tour in Iraq that lasted 8 months. In 2009 he went back to Iraq and this last tour lasted one year. The military certainly taught him discipline and leadership that can be considered as some of the most important qualities for any elected official. In 2015 Arellano, a sergeant in the Army reserves, small business owner and family man, ran for mayor of Dixon and won.

“I ran for office after corruption was found in town; I wanted to make sure the ‘good old boys’ couldn’t prevent the reforms that many of us felt were needed,” Mr. Arellano explained the reasons why he decided to become the Mayor of Dixon, IL.

He added that since taking this position more reforms were enacted, roads and infrastructure were starting to improve in Dixon as well.

“I am very proud to have pushed that into all corners of town, no matter their economic ‘power’,” Arellano talked about his accomplishments as mayor with great pride. “I have also put a lot of emphasis on economic development, and Dixon has a booming economy right now.”

Residents of Dixon approved of the job Arellano was doing and reelected him for the second term in the spring of this year. After a long discussion with his biggest supporter, his wife, the mayor of Dixon Liandro Arellano Jr reenlisted with a 6-year contract with the Reserves at the 485th Engineer Company in Machesney Park in March of 2018.

“I reenlisted for a few reasons–for one thing, after 15 years it was very hard to consider taking off the uniform permanently,” he explained his decision to reenlist. “The access to good family benefits was a factor, especially so close to the retirement age (20 years is the minimum for a career in the Army). It’s also very hard to leave your Soldiers after serving with them so long, and I certainly take pride in continuing to serve my country.”

Not long-ago Mayor Arellano received a notice of deployment.

“As of this month, though, I am a member of the 317th Engineer Company out of Homewood, IL; I was transferred there to serve as a construction squad leader during their upcoming deployment,” he shared.

He will be leaving sometime in August and he might be gone for about 9 months.

“The location can change, too, but right now we are planning on starting in Kuwait and seeing where the Army engineers are needed–we go where the missions take us,” Sergeant Arellano explained what he might be doing during his deployment. “That very well might be back into combat zones just like the last two tours. If so, I am battle-tested and ready.”

“People were supportive of that, and I have received overwhelming support (and even pride) from the citizens since the recent announcement that I would be deploying. It is humbling, actually,” Mayor Liandro Arellano Jr shared.

It was decided that most of his mayoral duties can be carried out through email and telephone communications.

“In the City Manager form of government, which Dixon implemented in 2015 as I came to office, the City Manager handles all day-to-day operations,” Arellano explained how this arrangement will work. “The mayor and council focus on policy making, budgeting, oversight, and constituent services. The biggest drawback, of course, will be the inability to meet with people face-to-face meetings, but other council members can step up to fill that role more often.”

He also added that while overseas he will use his downtime to communicate with the City Manager, City Attorney and council members.

“My military missions will always come first, of course, but I can still call in to council meetings to vote via teleconference–Illinois specifically allows work travelers to call in and make official votes. Military service counts as work travel under that statute,” he further explained.

It is quite an arrangement, but Mayor Li Arellano Jr has many people encouraging and supporting him. He feels a bit nervous about leaving his children and wife behind. While he will always worry about his family, at the same time he knows that the residents of Dixon are proud of him.

“The biggest thing I want the public to know is that I will still be available via voicemail, email, and the popular Facebook option. The only difference is my response times will be a day or two instead of within hours–but I’m sure they will understand that part,” Arellano reminded his constituents.

Liandro Arellano Jr is not someone who shies away from challenges or difficulties. With the strong support of his family and backing of the residents of Dixon, IL Sergeant Arellano will be more than ready to proudly serve his country and at the same time continue performing his duties as the mayor of Dixon, IL.