The definition of a census is pretty simple and straightforward. It is the numbering of people. The first time I ever heard of the word ‘census’ was during one of my bible studies as a child. I learned about how David had been punished after having taken count of the people of Israel without permission from God. Years later, we continue to partake in this culture of literally counting how many people there are in a certain place. The decennial census is one of the most inclusive civic activities in our country, covering every person in every household. The U.S. Constitution actually requires an accurate count of the nation’s population every 10 years. The next one up is this year: 2020.

Communities all across the nation are gathering together and forming what are referred to as Complete Count Committees (CCC’s). These CCC’s are established by community leaders to increase awareness and encourage residents to respond to the Census. I actually Co-Chair one of these committees myself in my hometown of Storm Lake, IA. Our group meets once a week to build awareness, share resources, recruit volunteers, create promotional material, and identify other leaders who can help reach out to “hard-to-count” population groups. These population groups are actually at a higher risk of not being fully counted in the census and therefore being underrepresented. Surprisingly, Latinos meet that requirement.

Latinos have been undercounted for decades. Latino children in particular are among the most undercounted populations in the United States. There are many characteristics that make the Latino community hard to count, such as language barriers, poverty levels, educational attainment. One of the main concerns shared with me from members of immigrant communities is the reluctance they have in responding to the census due to fear related with data confidentiality. Despite reassurance from the Census Bureau that they will not include a question about citizenship in the printed questionnaire for the 2020 census, many people are still afraid that it could all just be a trick.

I’m here to support my community and help fight off some of these myths. The Census Bureau is required by law to protect any personal information, and all of it is strictly confidential and used for data analysis purposes. By law, census responses cannot be used against anyone by any government agency or court in any way… not by the FBI, CIA, DHS, and especially not by ICE. I validate that this is a real fear people are having, so it’s important to make sure that the information we are sharing out to our family and friends is honest and accurate.

There are many things at stake if Latinos continue to be undercounted in the census. Political boundaries may not accurately reflect reality, Latinos may be denied a full voice in policy decision-making, and the needs of different communities may not be prioritized according to their real share of the population.

Census data affects our nation’s ability to ensure equal representation and equal access to important governmental and private sector resources for all Americans, including across racial and ethnic lines. Census results are used to allocate seats and draw district lines for the U.S. House of Representatives, state legislatures, and local boards. Just as importantly, it helps to guide community decision-making affecting schools, housing, health care services, business investment, and much more! These functions depend on a fair and accurate census. This year, I ask that you take the pledge to Get Counted, and encourage others to do the same. 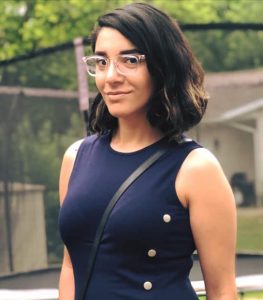 Mayra Alejandra Lopez is the Co-Chair of the Complete Count Committee of Storm Lake, IA.