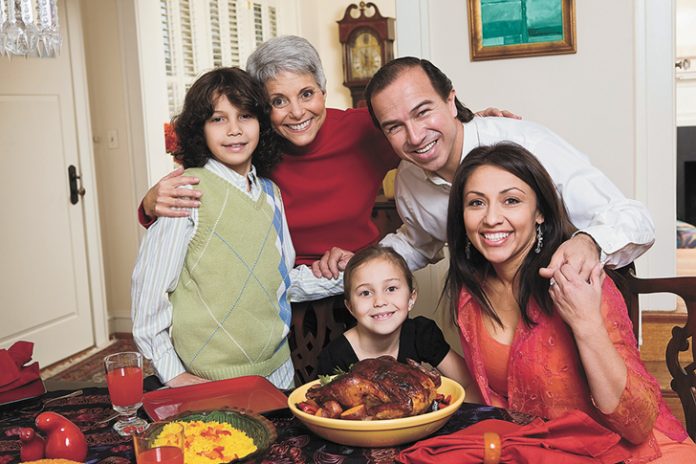 Without a doubt, over the centuries Thanksgiving for Americans has been one of the most anticipated celebrations of the year.

This year around 127 million homes in the United States will be celebrating this traditional holiday this number includes more than 52 million Hispanics.

Coming from many different countries of Latin America, Hispanics in the United States have adopted this celebration, original to Anglo Saxon groups, as their own celebration and infused it with their own traditions according to their country of origin putting a touch of their own flavor to it.

One of the most important aspects of this celebration is, without a doubt, is the dedication that each family puts to the feast that will be served on that day.

Turkey is a typical dish for Thanksgiving Day, but on the tables of Hispanic families, it gains different tastes and colors. This big turkey can be painted with colors of Mexican hot peppers and in the homes of Puerto Ricans, it even changes its name. The Puerto Ricans who love their lechon asado (roasted pork dish) invented something they call “pavochon”, a perfect recipe for the turkey that gives it the flavor of lechon.

During Thanksgiving many Hispanic homes in the United States turn on their ovens very early and the labor of making the dinner starts, sometimes preparations begin days before the holiday.

Mexicans also don’t just make plain turkey, sometimes they cover it with mole sauce, serve it with tamales, rice, nopales salad and of course the never absent tortillas. A good shot of tequila to celebrate the occasion and fresh fruit drinks for the children and those living in colder climates will make a nice hot ponche (Mexican drink made with fruits, sugar cane and cinnamon sticks).

Cubans usually substitute turkey with pork and of course it will be served with their traditional beans.

Different groups of Hispanics in the United States prepare for this holiday, especially those that have been here for many years and have put their roots down in this country. The tables in Hispanic homes will be full of flavor and traditions: pupusas, arepas, empanadas, ajies, hallecas, pan de jamon show us how Hispanics modify a holiday that is so traditionally American and adjust it to their own cultural characteristics without losing the essence of this whole celebration which is to give thanks.

Most of the Latinos use this date to recognize – same as the pilgrims did in 1621 by thanking the help they received from native Indians of this country – the same goes for Hispanics who recognize that through their work and tenacity they also have reached their own wellbeing in this country.