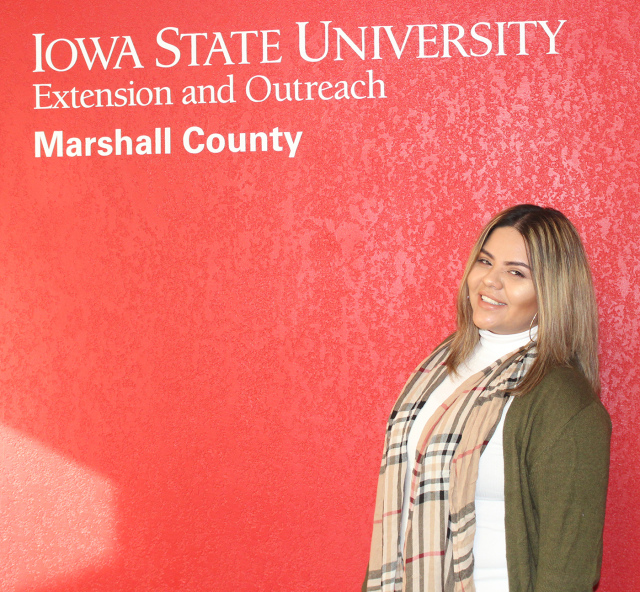 Norma Dorado-Robles is quick to thank Marshalltown High School staff and her fellow classmates at that time for helping her through school when she had limited English language skills.

Her best way to thank them now is by inspiring current students.

Dorado-Robles is a 2009 MHS graduate and went on to earn degrees from Marshalltown Community College and Buena Vista University. She now works as a 4-H youth program specialist with Iowa State University Extension for Marshall, Tama and Benton counties.

Arriving in Marshalltown with her family from Guadalajara, Mexico in 2005, Dorado-Robles was a 15-year-old freshman at MHS who would get frustrated that she couldn’t express herself the way she wanted with her limited English skills. She credits current MHS staff Deb Holsapple and Dan Terrones and former staff member April Bryant, who collectively didn’t let her settle for that as an excuse.

“They saw my potential and were always pushing me to challenge myself,” she said.

Holsapple, who is associate principal at MHS, said it was Norma’s dedication that led her to success.

“Norma was a fun, spirited young lady, who came to MHS without speaking English,” Holsapple said. “She knew that she was going to make Marshalltown her home which meant that for her to be successful, she had to learn English and to go on to college.  She was a strong self-directed learner who took responsibility for herself and set herself up for success in the future.”

Dorado-Robles now works in the schools in various ways through her job and volunteer efforts including the 4-H Club at MHS, STEM Club at Woodbury Elementary School and Junior Achievement. She also worked with the Al Exito group at MHS years ago.

The 4-H Club at MHS provides activities to students who are similar to her when she was in school.

“I think the underrepresented kids in the school need to be heard and need to be exposed to different opportunities,” Dorado-Robles said.

Knowing first hand the impact of mentoring, it’s important for her to give back now and to help guide youth in our community.

“If you have a mentor and know there are people that care about you, you will be successful,” Dorado-Robles said.

Norma’s main mentor years ago was former community member Joan Jaimes. When Dorado-Robles asked Jaimes how she could repay her for her help, Jaimes gave her some important advice.

“She said I could pay her back by going back to my community and doing the same thing she did for me,” Dorado-Robles said. “And that’s what I did.”