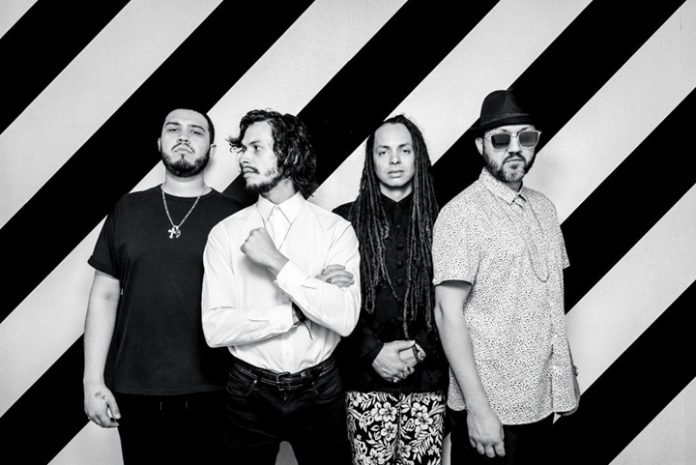 It’s hard to describe the music of Making Movies, a band that NPR Music placed on its Best Songs list of 2019, because it offers a combination of Afro-Latin rhythms and psychedelic guitars that make this group’s rock unique. Their most recent album, ameri’kana is an “oldies” station in the future, where the injustices sung about are long gone. “The album is a direct response to the divisions, corruption, and injustices targeting the Latino community today, and we gathered like-minded artists to join us in sharing the hope that one day those ills will be a memory”.  The sound that transcends genres is nourished by Latin music and rock’n’roll, two genres that Making Movies affirms are actually the same when they say “THE ROCK’N’ROLL IS LATIN MUSIC”. And this Saturday the band starts their new tour at the Gas Lamp in Des Moines, IA.

“We love the community in Des Moines, there are musicians and activists who have been part of our history for years.” vocalist Enrique Chi shared with Hola Iowa.

“There is a local group called Los Parranderos that were instrumental for our first performances in Iowa and we love them very much, and also his friends and wife are activists who work hard for immigrant rights and for the Latinx community. ”he added.

The album also highlights the participation of artists that combine to speak against divisions, corruption and injustice, with the hope that in a future day all these evils will be just a memory. Steve Berlin of Los Lobos and Ben Yonas co-produced the album that is packed with stars, including the Salsa icon Ruben Blades, as well as members of Flor de Toloache, Los Lobos and Ozomatli.

“The album was inspired by our collaboration with Rubén Blades. At some point Rubén listened to our music and decided to talk about the band during an interview at the Latin Grammys and via social networks he communicated his desire to collaborate with us. We met in New York and there began our friendship, based on a similar artistic search. We decided to write a song together, No Te Calles. This first collaboration was the first single from the album Paradise Road Gang which was nominated for Latin Grammy in the Album of the Year category. Our conversations on the theme of that song inspired our (new) album. ” Enrique Chi said.

Blades offered himself as a guide and as a resource to the band during the recording process, and appears on three of the tracks on the album, including Delilah, a song he composed along with Lou Reed, which Grammy.com described as an “ epic music collaboration brought together by the topic of immigration”

This is the rest of the Tour