When Latin Thunder began his journey in professional wrestling he never considered putting on a mask and emulating the great luchadores of Mexico. But late in life he turned to the great tradition of Lucha Libre to give his career a new and exciting direction.

Growing up in Muscatine Iowa to parents of Mexican descent Latin Thunder knew about the world of Lucha Libre from his father Jorge. His dad told him stories of reading comics of El Santo as a child and watching lucha libre in Piedras Negras. “Also when we spent our summer vacations as a family on the Texas border town of Eagle Pass my dad would occasionally watch a Lucha movie that starred Santo, Blue Demon and Mil Mascaras. “

After training for pro wrestling in Dallas Texas and having his first match at the Sportatorium in 1996 Juan (Latin Thunder’s real name) moved back to Muscatine. In the Midwest he traveled all over on the independent wrestling circuit, a minor league for the sport.

After gaining some experience Juan decided to become a bad guy in wrestling. Playing an anti American villain who spoke Spanish to antagonize the fans he was very good at his job, which was to make fans boo him. But at an event where he played the villain he saw a Hispanic family in the audience. Now with a family of his own he felt bad for how his character in wrestling made the family in the audience feel.

Juan decided he had to make a change. As he was getting older and more mature his future in pro wrestling was looking bleak. “I was still in shape and going to the gym but you can’t hide the years on your face. And this is a young man’s sport. My hair was graying a bit and I was tired of being the bad guy. I wanted to portray something positive, something beautiful about my Mexican culture.”

One day at his house an idea came to him that seemed to solve all his problems. He would become a luchador!

“The mask would hide my older features, my skills in the ring were still good and my body was still in shape so I wanted to keep wrestling. Also the masked Luchador is an iconic symbol of Mexico. It’s known all over the globe. It’s a beautiful part of our identity, like the Mariachi and our tequila.”

Juan decided to emulate the great classic Lucha Libre stars of the past more than today’s stars. “I really studied Mil Mascaras more than anyone else. Mascaras had such a great physique, beautiful wrestling costumes and capes. I also saw videos and pictures of Blue Demon and Canek as well.”

He wanted to create an authentic character and being bilingual and Mexican American was a good start. He spent several months deciding on his character’s appearance. “I have my mask, boots and tights all made in Mexico.” He rededicated himself to the gym and added some high flying moves to his repertoire.

The new persona has been a hit with fans, especially young kids. “The masked luchador is a superhero really, that’s how kids look at us. And it’s been great to see so many kids who aren’t even Hispanic love the character. I’m very proud to be bringing something from Mexican culture to small town Iowa and people of all nationalities are enjoying it!”

He wrestles regularly throughout the Midwest. A few years back Latin Thunder wrote his memoirs in pro wrestling, “Latin Thunder My Journey Off The Top Rope!” His book is available on Amazon.

“I’ve always enjoyed reading. The book was a natural step as I wanted to tell my story. It’s a story of immigrant parents, chasing a dream in a tough sport but learning to always try to move forward and not giving up.”

You can catch Latin Thunder perform this Friday June 18 at Mercado on Fifth Sponsored by Ascentra Credit Union. 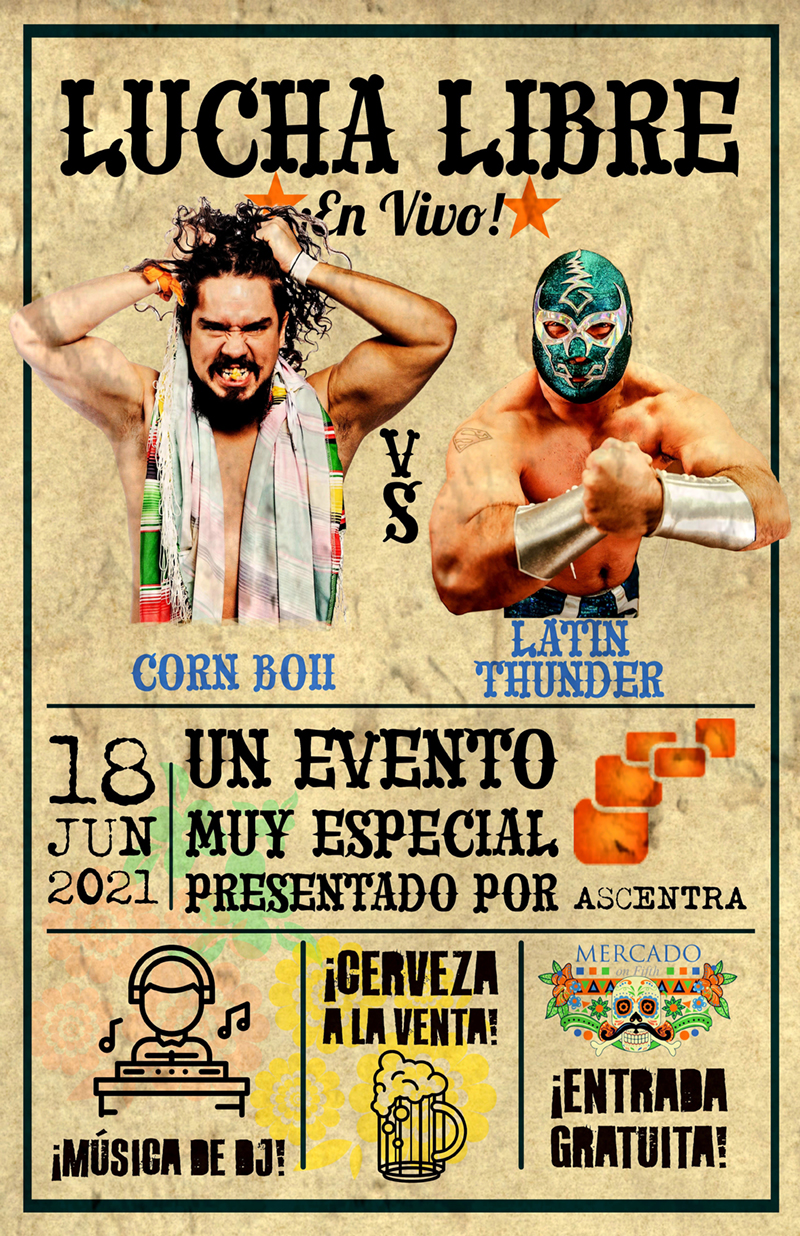