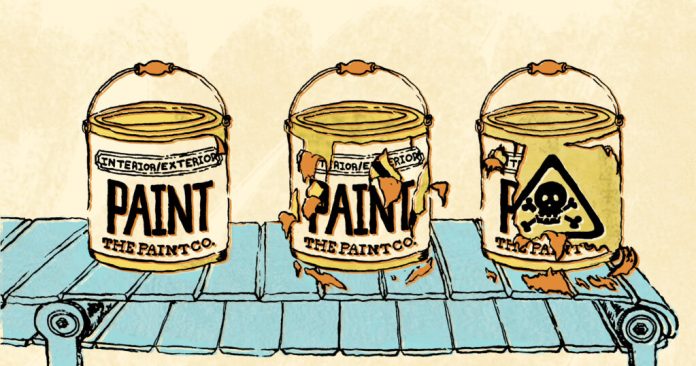 Lead is a dangerous neurotoxin. Researchers have known that for decades. But the substance stuck around in everyday products like paint and gasoline for decades.

One big reason: The lead industry spent years using racial bias to divert public attention away from the dangers of the toxin and minimized the impact of mounting evidence indicating lead was poisoning children with devastating effects.

Health officials warn that there is no safe level of lead in children.

Gerald Markowitz is a history professor at John Jay College of Criminal Justice and the City University of New York. He’s also an expert in occupational safety and health.

In 2002, he co-wrote “Deceit and Denial: The Deadly Politics of Industrial Pollution,” which describes attempts by the lead industry to deceive Americans about the dangers its products posed to the public.

As part of The Missouri Independent and NPR Midwest Newsroom’s collaborative investigation of high levels of lead in children in Iowa, Kansas, Missouri and Nebraska, Niara Savage interviewed Markowitz about the lead industry’s tactics and the lasting implications for public perception and policy.

Savage: What is the Lead Industries Association and how did it control the flow of information to the public?

Savage: In your book “Deceit and Denial,” you and co-author David Rosner talk about the way the lead industry manipulated the public’s idea of who was at risk of lead poisoning. How did they do it and how did they get away with it?

Markowitz: Well, the way the Lead Industries Association was able to manipulate the perception of lead poisoning was that they defined it as a problem of what they called slums. That is inner cities where the housing was deteriorating and primarily children of color were being exposed to flaking lead off of the walls and ceilings.

Savage: It seems like the 1957 Lead Industries Association’s annual meeting was an important moment in the framing of the narrative about lead. What happened there?

Markowitz: At that meeting, the Lead Industries Association Director Manfred Bowditch  defined lead poisoning as a problem of slums. And again, these are his words — ineducable parents. In a private letter, he made clear who he meant by ineducable parents. He was talking there, in his words again, as Negro and Puerto Rican parents. And so he was in that meeting really blaming the victims. He was blaming the parents of children for not preventing lead poisoning.

Savage: In “Deceit and Denial,” you also talk about 20th century race relations and immigration in the US and how Americans had a certain quote, “obsession with whiteness.” How did the lead industry capitalize on that?

Markowitz:  [In] the early 20th century, there was a tremendous emigration of Jews from Eastern Europe, Italians from Italy and southern Europe. And much of America who were native born English, Anglo-Saxons did not yet consider that population white.  Their conception of whiteness was, you know, the pure Anglo-Saxon Protestant society. And in the migration of African Americans to northern cities, there was also this added element of racism in American society that came about as a result of both immigrants from Southern and Eastern Europe, as well as African Americans from the south. And the Lead Industries Association took advantage of this, in terms of defining lead, as a pure white lead. That was something that could appeal to the white Anglo-Saxon Protestant majority at the time, and see this issue as being something that they could capitalize on in their advertising and promotion of lead paint.

Savage: What role did the NAACP, the Black Panthers and other activist groups play in calling out racial disparities and lead exposure? And how did that contribute to the emergence of the concept of environmental racism?

Markowitz: The civil rights movement of the 1950s and ‘60s was really crucial to the development of an understanding of lead poisoning as an environmental justice and environmental racism issue. The Black Panthers and the Young Lords specifically made lead poisoning an issue of poverty, an issue of racism, that the society had neglected and that the society had not addressed. And so when they made this an issue in the 1960s, and ‘70s, they really performed an incredible service to society as a whole. Because lead was eventually eliminated from gasoline. Lead was eventually eliminated from paint. And the lead levels of children all across the country were dramatically reduced.

Savage: What lingering implications on environmental policy or public opinion about lead poisoning stem from those early narratives?

Markowitz: Well, it’s kind of shocking that today, we still have some 500,000 children who have elevated levels of lead in their blood, that are affecting their IQs, affecting their neurological development, affecting attention deficit disorders. And these are really horrendous effects that we are seeing today, when we’ve known, going back to the 1920s, that lead poisoning was totally preventable. The way you prevent lead poisoning is to take lead out of the areas where children can get access to it. And that is, you remove lead from the paint in children’s homes, remove lead from the lead pipes out of areas where the water is coming into children’s homes This is something that is possible to do. It isn’t something that we don’t know how to do. And yet, we’re not willing to spend the money to do that because we basically have not made this a priority to protect our children from the horrendous effects of lead.

Unleaded is a joint investigation by The Missouri Independent and NPR’s Midwest Newsroom exploring the issue of high levels of lead in children in Iowa, Kansas, Missouri and Nebraska.