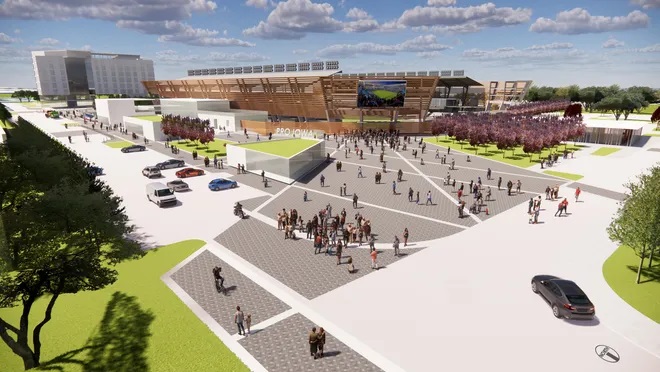 Des Moines won’t see a downtown soccer stadium until at least 2025, a year after the team’s owner previously projected.

The Iowa Soccer Development Foundation announced Monday that it will delay construction because of the rising cost of building materials, including steel and concrete. The group also said contractors can no longer give them clear estimates for when they can provide enough material.

Kyle Krause, the team’s owner and CEO of Krause Group, previously told the Des Moines Register he wanted the stadium completed by 2024.

The announcement comes as producers, from lumber yards to steel mills, are struggling to keep up with builders’ demands. The supply shortage has lasted for more than a year. Some industries don’t have enough workers. Others made key miscalculations, such as the steel mills that shut down in the early months of COVID-19 when car manufacturers temporarily closed factories.

Nate Easter, director of commercial development at Krause+, part of the Krause Group, said prices for the main components of the stadium project continue to rise.

Steel prices skyrocketed in 2021, ending the year up 246% over where they stood in November 2020, according to the U.S. Bureau of Labor Statistics. Prices dropped somewhat early this year before rising again in April.

Concrete prices, meanwhile, were up 15% in April compared to November 2020.

Easter also said contractors won’t give Krause+ a firm timeline for when they can provide enough supplies for builders. Contractors give the company wide estimates, saying they will deliver steel sometime in the next six to 18 months.

“It’s just a lot harder to have confidence,” Easter said.

Krause, who owns the Des Moines Menace soccer team and the Italian club Parma, announced plans for the downtown stadium in September 2019. The Iowa Economic Development Authority awarded $23.5 million to the project last summer, and Krause expects another $30 million in private donations. Des Moines officials are negotiating a deal to provide city funding for the project.

USL officials require franchises to have dedicated, modern stadiums. The Krause Group, which owns the Kum & Go gas station chain, has projected the stadium will cost $75 million, according to filings submitted to the IEDA both in spring 2021 and in February. The price tag was consistent despite the increased price of construction material.

“Input costs are higher and the budget is a set amount,” Krause Group spokesperson Cait Suttie told the Des Moines Register in March. “So some design things will have to change.”

But on Monday, the nonprofit raising funds for the stadium said it needed to delay construction to preserve “the integrity of the facilities and experience for visitors.”

Dan Jansen, program manager for the Iowa Soccer Development Foundation, said the builders couldn’t scale back the design and still meet the USL’s requirements for a stadium. He said the USL did not reject any design adjustments that the Krause Group proposed.

“We won’t deliver anything less than what is considered — or required — for a professional stadium,” Jansen said.

USL spokesperson Will Kuhns said in a statement that Monday’s announcement will not impact the league’s franchise agreement with the Krause Group.

The stadium is the focal point of a redevelopment planned south of downtown. The Krause Group proposes to build a plaza, a music venue, shops, restaurants, breweries, hotels, apartments, offices and a Kum & Go. The Krause Group told city officials it will spend $550 million on the projects.

Easter said the Krause Group, the soccer foundation and Des Moines officials meet “a couple of times a week” to negotiate multiple development agreements for the projects. The agreements would provide public money to the stadium and the surrounding buildings.

Easter said he doesn’t know whether the city will give more money because of the increased construction costs.

“We’re talking about a lot of things on the project,” he said. “Those costs are one of the things.”

Dico site may require extra cleanup by the Krause Group

In its news release Monday, the foundation also blamed the construction delay on an environmental cleanup of the property.

The land is south of Martin Luther King Jr. Parkway on the east bank of the Raccoon River, the former home of a factory. Environmental regulators found dangerous chemicals on the property about 40 years ago.

The buildings sat vacant for about 25 years until the city took over the land as part of a settlement with the former owner, who failed to pay fines.

U.S. Environmental Protection Agency workers, as well as city contractors, tore down the old contaminated factory and offices last year. EPA workers are cleaning up a pond on the property.

Des Moines Assistant City Manager Pam Cooksey said the EPA is expected to remove contaminated sediment from the pond by the end of the month. As of last week, she said, the EPA was waiting for test results that will identify the chemicals in the dirt. The results will tell the EPA workers which waste treatment centers can handle the sediment.

Cooksey said the EPA will replace a treatment system that uses a device known as an air stripper to pull chemicals out of water that seeps through contaminated dirt after rainfall. The regulators won’t make the change until the Krause Group decides where exactly to build the stadium.

Assistant City Manager Matt Anderson said the Krause Group may need to do more environmental work. Workers laid an asphalt cap over the contaminated ground. To construct buildings or plant trees, the Krause Group will break through the asphalt.

Some parts of the land are “hot spots” where chemicals are densely packed in the soil. Anderson said the Krause Group will need to haul that dirt away before building.

“We have a general idea,” Anderson said. “But not to the point where we are going to plant each tree.”

He added: “The minute you put a spade into the dirt, you’ve got to have a plan.”