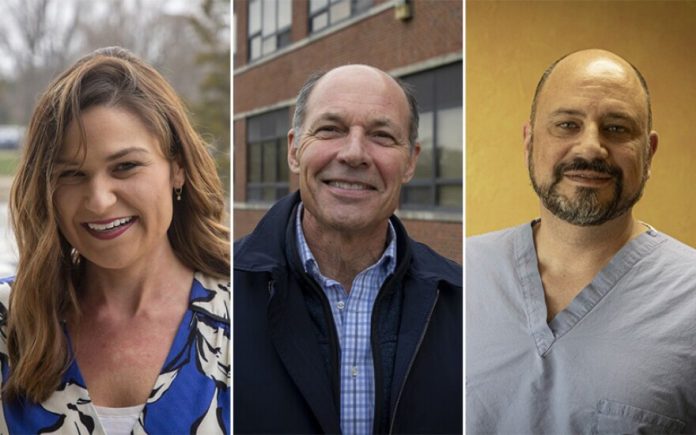 The three Democrats competing for the party’s U.S. Senate nomination met for their second debate of the primary campaign Thursday night and laid out their views on defending abortion rights and responding to mass shootings.

In the debate hosted by Iowa PBS, the candidates also expressed differences in how far the federal government should go to cancel student loan debt and provide universal health care.

Abby Finkenauer, Glenn Hurst and Mike Franken are competing to go on to the general election to challenge Republican Sen. Chuck Grassley, who is seeking an eighth term in office. Grassley has his own primary challenger in state Sen. Jim Carlin of Sioux City.

The candidates each said they would vote to make abortion access explicit in federal law, something the Democratic-controlled Senate tried and failed to do last week in response to a leaked Supreme Court draft opinion that suggested the justices may overturn Roe v. Wade.

Finkenauer said Congress should step in to stop states from passing abortion bans. She pointed to a bill recently passed in Oklahoma that would outlaw abortion starting at fertilization.

“That’s about control,” said Finkenauer, who served one term in the U.S. House for Iowa’s 1st District. “It is why we need somebody standing on the floor in 2023 in the United States Senate who is a woman of child-bearing age, who does actually have a personal stake in this.”

Asked if they would support restrictions to abortion rights around parental consent or fetal viability, the candidates all said it should be a matter left between a woman and her doctor.

Recent deadly shootings in New York and California have renewed questions over how Congress should respond with legislation on guns or hate crimes.

The 18-year-old suspect in the Buffalo grocery store shooting that killed 10 people reportedly used a semi-automatic rifle that he purchased legally from a local gun dealer and then modified himself.

Finkenauer stressed background checks on private gun purchases and red flag laws that remove guns from individuals who may pose a violent threat — although the Buffalo gunman was not flagged under New York’s law.

“Those people are responsible gun owners. They do not commit crimes. They store their firearms properly. They’re mentally and physically capable and they understand the effects of them,” said Franken, a retired Navy admiral. “I grew up with firearms. It’s been part of my professional life. There’s no one in Washington, D.C., or in Iowa, or in the NRA who’s going to ‘gun-splain’ me.”

The candidates agreed that the federal government should take a larger role in providing health care coverage, but disagreed on how far that should go.

They were asked how they would vote on a bill to provide universal health coverage through Medicare, which mostly covers older Americans. Hurst, who works as a doctor in the rural western Iowa town of Minden, said it would fill gaps in coverage.

“We can’t be just putting Band-Aids on cannonball wounds. We can’t be taking the Affordable Care Act and expanding it or adding a Medicare option to it. Those are not on the table. They don’t work. Medicare for All is the solution,” he said.

Franken said he supports a smaller expansion of Medicare for children under 5 and adults over 50 years-old, an incremental step he said would give the system time to “grow into itself.”

Finkenauer said she supports creating a public option that’s like Medicare, and wants to increase Medicare reimbursements for providers. But she said she would vote no on Medicare for All, and wants to protect existing private insurance plans for workers.

“If they have negotiated their health care through their union, through their employer and they like it, I’m not taking away anybody’s health care from any Iowan or any American,” she said, adding that a public option “would add competition into the marketplace to bring down private insurance, anyway.”

The Biden White House is said to be considering options to provide some form of national student-loan forgiveness. According to the Iowa College Student Aid Commission, more than half of graduates from the state’s public universities leave with debt that averages around $28,500.

Finkenauer said she supports targeted debt relief based on a person’s income, and mentioned a cut-off for people making more than $100,000 per year. Hurst, on the other hand, said he would put no caps on student loan forgiveness and even supports paying people back for debt they repaid in the past.

Franken said cancelling debt is a divisive issue and does nothing to deal with the cost of college.

“Someone who graduated two years ago — do we re-compensate them? What about somebody five years from now who has a large debt? Is this an ongoing thing? And if we constantly wipe out college debt what do you think the cost of college is going to do?” Franken said.

Early voting for the primary election started on Wednesday, which means people can now vote in-person at their county elections offices. Voters who wish to vote by mail must request a ballot. That request form must be received by your county auditor by 5 p.m. on Monday, May 23. Primary Election Day is on June 7.