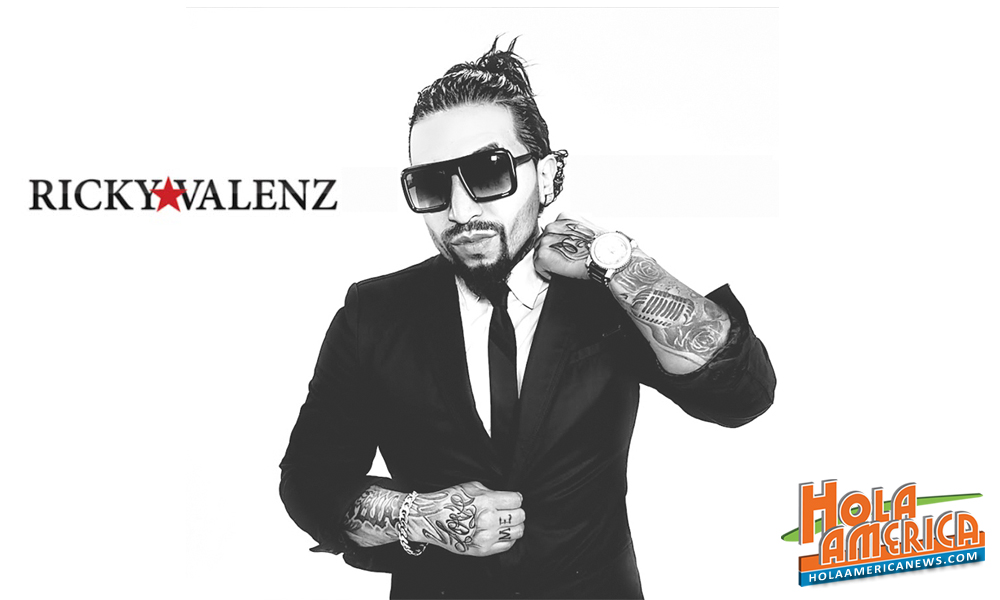 It’s 5 a.m. in New York City. The taxis from the streets below and sirens from multiple Police cruisers can be heard slowly fading off, into the distance.

Ricky Valenz is awake. He can’t sleep from the adrenaline rush. It’s not everyday you’re a capella group gets to audition for a music label; but it’s a dream come true when that record label is Def Jam Records. The grand Hip Hop label founded by Russell Simmons and Rick Rubin.

On this day Tuesday, September 11th, 2001 Ricky Valenz life, in more than one way, would change forever.

Today, Tuesday July 18th, 2017 Ricky is relaxed and having dinner with friends in San Antonio, TX. he took a break from his dinner to talk with Hola America about the long and winding journey of his life and the decision that has spring boarded his career to elite Tejano super stardom almost overnight. 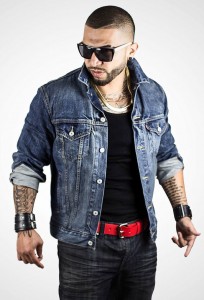 Born in Lansing, Michigan, the son of a General Motors factory worker, Valenz spent his childhood days dreaming of someday playing professional baseball. Who could blame him?

His family participated in an open door program with The Lansing Lugnuts, a single A minor league baseball club, to house Latin and Hispanic players from overseas through the baseball seasons. That program has seen the likes of former Chicago Cubs pitcher Carlos Zambrano and Houston Astros Slugger, Carlos Beltran, becoming young Ricky’s room mates.

From season to season players would come and go. Each one would leave his own inspiration on the boy who would grow up and eventually don a uniform for team USA, representing the country in Puerto Rico.

“I always had a sense growing up that if I focused on doing something long enough, then I could make it happen on my time.”

Although being of Mexican descent Ricky was raised by a Puerto Rican step mother who he’s seen as his mother growing up. “I was Puerto Rican, I mean my mother was Mexican but I was Puerto Rican and I grew up listening to Bachata, Salsa and Reggaeton and when I was listening to my music it was always Hip Hop.” Tupac Shakur is who he credits as his Hip Hop influence. With that being said Ricky isn’t your grandma and grandpa’s Tejano star although if he were to come to dinner, they would probably love him.

He uses his body as a canvas for blue ash ink. The women in his videos, whom he swears are hard to work with, wink wink, are scantily clad. His hook filled corridos and cumbias are twisted with free flowing rap lyrics with a profane word here and there. But when he does use profanity it’s poetry. It’s needed. Like a bridge needs support.

He laughs, “I grew up listening to Hip Hop and R&B that’s just what I liked so for a Midwest boy to make it in Tejano music is really rare.” It is. It’s very rare.

“Music has always been a thread throughout my life. My grandpa used to get his guitar out and we all just used to gather round and sing songs.”

Shortly after baseball Ricky would return home and join his friends in an R&B a capella group. The group would gain the attention of Def Jam records who would schedule an appointment for the band in their New York offices at 12 o’clock in September of 2001. Ricky would have to ask work for the time off, after all this was a once in a lifetime chance.

He meditates on this backstage before his shows. His family and his blessings. In that order.

When he speaks of his decision to move from Lansing to San Antonio he mentions, almost without a beat, East Moline, Illinois. A familiar town to him.

It is where his uncles, his birth mother’s siblings, planted their roots and call home. The well respected late Don Luis Ramos and his equally respected brother Jose Ramos became known for their work as a trio, Los Hermanos Ramos, performing shows with their older brother. The family is deeply cultured in family and very practiced in music. It’s in their blood. From generation to generation it’s passed down and never watered down. It’s in Ricky. Multiplied.

He has the talent that transcends that of musicians that you normally go home and tell other people about.

His video’s, although risqué, show he’s having a good time being Ricky Valenz and enjoying his celebrity. You can see it in his face if you look close enough in his video “Esperandote.” A melody filled cumbia that has a Happy Days hook before the chorus. His catalog is a refreshing and strong foundation for a young career ready to flourish. If you like to dance “Cosas del Amor” is one of Valenz singles that feels nostalgic with its fluttering chorus accordion, reminiscent of classic La Mafia albums but clever in it’s R&B subtleties.

When Ricky finally went down to the hotel lobby that day in September his conscience spoke to him loudly. As he looked around he had seen the TV screens and the welling in people’s eyes. They were fascinated and fixated on the news. Like statues. There was a chaos in the air and yet a calm pounding against it.

Ricky was left with one question, “How am I going to get home?” He knew in his heart, there wasn’t going to be a meeting.

In the following days Ricky was stuck in New York City, waiting for an opportunity to go home. The city had shut down for days and he was stuck.

Upon arriving home he would be greeted with the reality of unemployment. He’d been gone for too long. Ricky didn’t sweat it. He was from a Midwest city’s streets, wrapped with thick skin after time. They are towns that can drag you down and keep you there. But Ricky Valenz had the one thing inside him that people these days lack. Motivation, he had a confidence and talent that only God could distribute.

Since Ricky Valenz left Lansing, Michigan for San Antonio not more than 5 months later he was gaining the attention of the Tejano industry. He was nominated and won 3 Tejano Music  Awards including “Artist of the Year” and “Best New Male Vocalist of the Year” at the 2015 Tejano Music Awards. A.B. Quintanilla asked him to be the frontman for the Kumbia Kings All Starz tour last year. He’s also worked with Gary Hobbes and Jay Perez. His unique approach of blending Tejano and Hip Hop music has gained him a seat at the table.

Now, he’s focused on his solo career and is excited about things to come. When I asked him about Luis Fonsi and Daddy Yankee’s monster hit “Despacito” and whether or not he would ever think about taking the path (crossover) that Selena cleared the way for artists like him, he answered, “Yes, I have and am thinking about that.” I can hear him smiling, a sign to me that he doesn’t want to give me too much, “I’m just focused right now and I’m looking forward to doing my thing and bringing my fans my best always.”

Ricky Valenz is a phenomenal Tejano singer with a velvety Boyz II Men style voice. He uniquely blends the styles of Tejano and Hip Hop music. 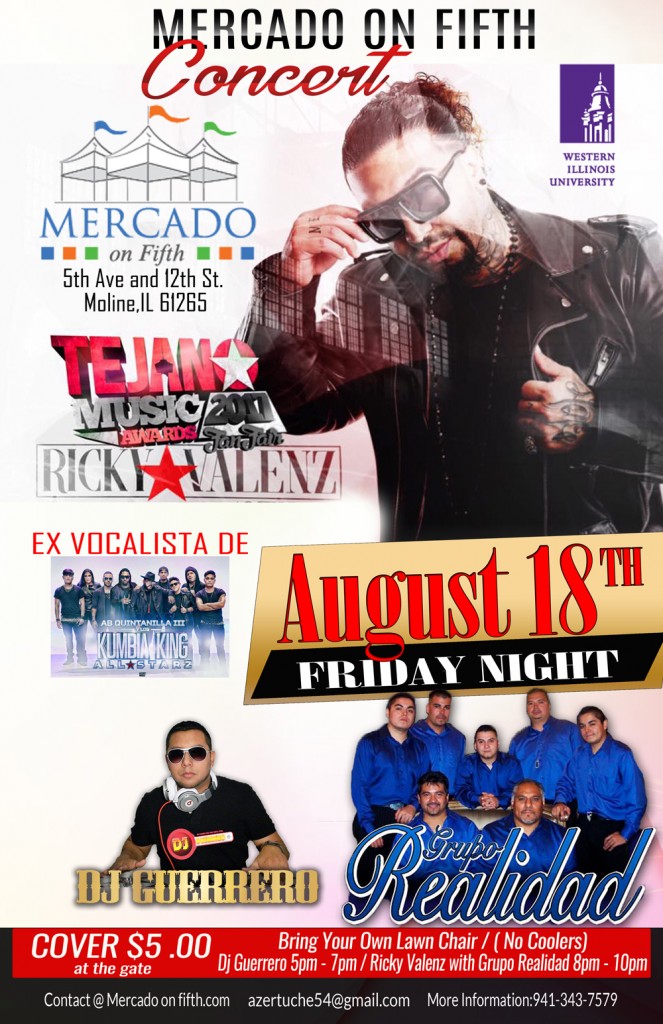