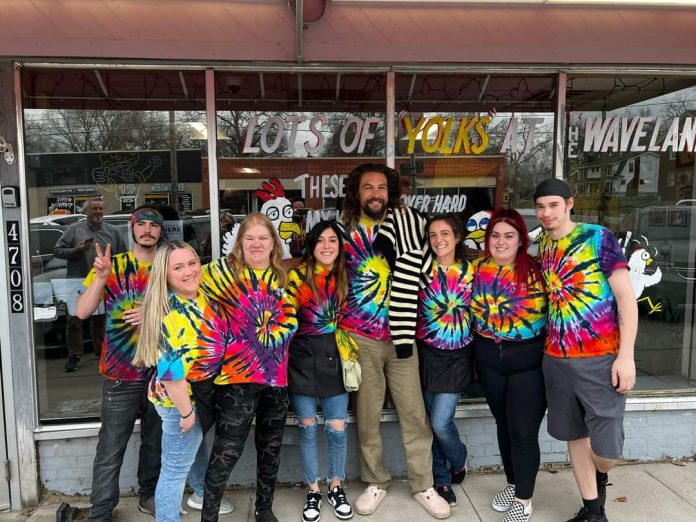 Actor Jason Momoa continued his post-Oscars trip to Des Moines on Tuesday morning when he stopped in at one of his favorite breakfast and brunch spots, Waveland Café, 4708 University Ave.

According to staff at the café, the actor — who recently portrayed Duncan Idaho in the Academy Award-winning “Dune” — visited around 10 a.m. with his family. The actor, who grew up in Norwalk, ordered, and quickly finished, the Momoa: a full hashbrown with biscuits and gravy, two sunny-side up eggs and a side of bacon.

“Have you ever twinned with Jason Momoa?! Well, we sure did here at the Waveland today! Thanks for always stopping in and supporting us every time you’re in town Jason!” Waveland Cafe wrote on Facebook. Momoa wore a tie-dye T-shirt that the staff at Waveland Cafe don.

After breakfast and a photo with the staff shot by a diner regular, Momoa also stopped by West End Architectural Salvage, 22 Ninth St.

“We’ve done a ton of pieces for him and a few pieces for his mom,” West End owner Don Short said. “They just roll in and hang out and maybe buy something.”

According to Short, Momoa — who’s a regular customer at the business — picked up some “old lighting” and “table tops made from copper tin.”

“Dune” has a sequel scheduled to release in October 2023, but audiences will be able to see Momoa on-screen with “Aquaman and the Lost Kingdom” next year in March.

He also wore a blue and yellow pocket square with his Henry Poole tuxedo in support of Ukraine.

Isaac Hamlet covers arts, entertainment and culture at the Des Moines Register. Reach him at [email protected] or 319-600-2124, or follow him on Twitter @IsaacHamlet.