MOLINE, IL – WQPT, Quad Cities PBS, has been awarded $30,000 from the Illinois Arts Council for the creation of a new documentary “Letters Home to Hero Street.” The film will deal with correspondence from Hero Street soldiers to their families as they fought and died in World War II and the Korean conflict.

“We are so pleased to receive the grant because it allows us to create a documentary on a topic that is near and dear to our community,” said WQPT General Manager Mary Pruess.

The project is being conducted in cooperation with Fourth Wall Films, headed by Kelly and Tammy Rundle.

“I am excited to be working with the Rundles. We have aired all of their documentaries and they always create compelling films that are beautiful and well researched,” said Director of Local Content Lora Adams.

The documentary will be completed by the end of the year and will air on WQPT in early 2015.

To see some of the work Fourth Wall Films have done on Hero St please follow this link: 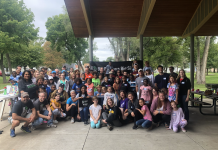 Commit to being Big in 2021 as there is a need for mentors with over 100 youth on a waiting list.