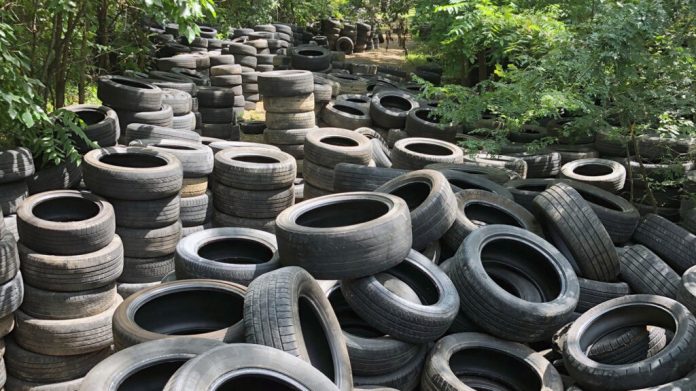 The state of Iowa has fined two Davenport men $10,000 apiece, accusing them of illegal tire hauling and abandoning thousands of junk tires on multiple properties.

The Iowa Department of Natural Resources imposed the fines against David Omar Mercado and Tim Peters this month after attempting to get their tire-hauling efforts into state compliance for nearly two years. Eventually, the men stopped communicating with state officers and apparently left the area, said Kurt Levetzow, an environmental program supervisor for the DNR.

The state’s investigation began with Peters’ brother Billy, who had lived on an acreage within Davenport city limits and accumulated up to 16,000 tires there by early 2020.

“If you could track him down, I’d love to have a conversation with him,” Levetzow said. “We can’t find him.”

Levetzow said Billy Peters was a registered waste tire hauler who had planned to sift through his stacks for decent tires to resell but, for a variety of reasons, fell behind and eventually abandoned them.

“He had a gazillion excuses,” Levetzow said.

Billy Peters had also hauled tires to two other properties, in nearby DeWitt and rural Lowden, DNR records show.

Before the DNR could take action against Billy Peters, the city of Davenport obtained a court order to haul the tires from the in-town acreage, which took several days in February 2020.

The city estimated it would cost up to $100,000 to clean up the site, according to local news reports.

“Instead of working with me, they worked completely against me,” Billy Peters told WQAD News at the time.

A month later, the DNR began investigating another site Billy Peters rented in DeWitt, where he had amassed and abandoned in excess of 1,000 tires, according to a DNR administrative order. That’s when brother Tim Peters got involved and pledged to remove the tires, according to DNR.

Tim Peters submitted an incomplete application to be a waste tire hauler several months later and was never properly registered with the state, the order said. Those who register pay an annual $50 fee and need a financial assurance bond of at least $150,000 — which DNR officials estimated would cost about $1,500 per year — to cover the cost of environmental cleanups, according to the order.

The owner of the DeWitt site eventually disposed of the tires himself at an unspecified cost.

In September 2021, the DNR received another complaint about Tim Peters hauling used tires to a residence just outside of Davenport city limits. He lived there with Mercado.

“The individuals were reportedly being paid by local businesses to pick up waste tires, thereby undercutting legitimate licensed waste tire haulers and recyclers,” according to a DNR order.

Levetzow said it’s common for haulers to charge between $3 and $5 per waste tire, whereas Tim Peters and Mercado were charging $1 or $2.

DNR officers found two semitrailer truck cargo boxes that were filled with tires and a large pile in the back yard.

Tim Peters explained that he had planned to grind the tires but was unable to obtain the equipment, according to DNR records. He said he needed to haul more tires from local businesses to earn enough money to pay an Illinois company to dispose of the rest.

Tim Peters also mentioned that his brother Billy had taken tens of thousands of tires to an acreage near Lowden owned by relatives, Brenda and Bradley Miller. There, DNR officers found several thousands of tires and pits where they had been burned. Residents are prohibited by law from accumulating more than 500 tires without a permit.

The Millers “indicated they did not know this was a violation of state law, and they were just trying to help Billy out,” a DNR order said. Tim Peters was subsequently ordered to stop hauling tires, but the pile at his rented acreage appeared to grow in the next two months. DNR officers also uncovered two storage units he rented that were also filled with tires.

Levetzow said he has been unable to contact any of the men. Iowa Capital Dispatch also couldn’t reach them to comment for this article.

Consequently, the DNR was unable to negotiate an agreement with them to abate the environmental violations and fined Tim Peters and Mercado early this month. Their fines of $10,000 apiece were the maximum allowed by Iowa law.

The DNR reached an agreement with the Millers to dispose of the tires on their acreage without being fined.

“Their fine is working to get the tires properly cleaned up,” Levetzow said.