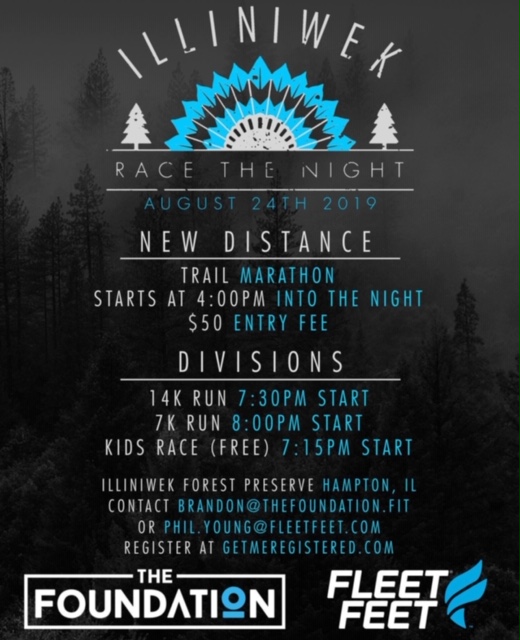 If you are a runner in the Quad Cities, you know that there is pretty much a running event almost every weekend from early spring to late fall. And as much as the QC running community loves the sound of pavement under their shoes, a change of scenery is always welcome. Brandon Bartz, owner of The Foundation, along with Fleet Feet Sports in Davenport offer a nice break from the normal 5K this weekend at the Illiniwek: Race the Night at the Illiniwek Forest Preserve in Hampton, IL. “We decided to add the marathon to this race,” said Bartz. “And that did boost some interest for the event and the longer distance people.”

Along with the new marathon distance for this event, runners can choose from a 7K and 14K option with a kid’s race offered for free as well. And if you are on the fence of trying your first trail run, Bartz ensures that you have nothing to worry about and credits social media to being a big part of the newly found interest in the sport. “Social media is changing all the time and the people that are doing those types of races have pushed trail running more in general,” said Bartz. “Your general athlete that does a little more of the weekend-warrior style running probably sees more trail running on social media than ever before.”

As I said before, anyone that has ever run at all, from one mile to fifty, can attest to every mile feeling like it takes forever and sometimes you just think that you want the race to be over. Bartz explains that trail running is much different than that and most of the time, much more enjoyable. “I think that people are scared of trail running a little bit because of their lack of experience of doing it,” explained Bartz. “I think one of the cool things about it is you are out there running, and at the end of the day running is running, you are going to get tired, you are going to get run down but the thing that’s different is you are constantly looking down at tree rungs or an obstacle or the tree or scenery, so your attention is a lot less on the pain of running and more of the opportunity to see cool stuff and the experience itself.”

After the Illiniwek Trail Run, Bartz will be teaming up with area runner, Kyle Dietz for the Lost Roads Endurance Run on Saturday, September 7th in Lost Grove, IA and then the Blackhawk Trail “Spirit of Sauk” trail run on Saturday, October 19th which he hopes to make a three race running series next year. “There is a lot of races in our area,” explained Bartz. “And now that we’ve partnered with a few people in the area, we have three events. There’s just a lot of stuff going on and the buzz is big.”

So, if you are training for an upcoming race or just want to get out of your comfort zone this weekend and soak up some sweet natural scenery around you, check out the Illiniwek: Race the Night trail run. “A lot of people say, ‘I was out at night running the race and it was dark and the headlamps were bouncing around and it was exciting, and I was having fun,” said Bartz. “The 7K at Illiniwek goes by pretty quick and the next thing you know you are two to three miles in and you don’t even notice it.”

For more information or to register for the Illiniwek: Race the Night 7K, 14K and Marathon trail run visit, www.thefoundation.fit/illiniwek-race-the-night-7k-trail-race/