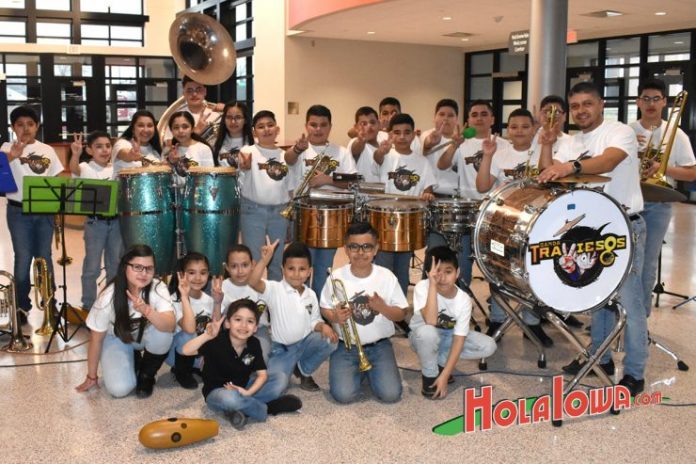 Move over, Raymix, a group of kids from Council Bluffs, Iowa is taking the world of music by storm. Banda Los Traviesos de Joey Camarillo has been gaining popularity lately. Chances are you might have seen the video of their rehearsal of the song from Los Angeles Azules and Natalia Lafourcade “Nunca es Suficiente” that recently went viral and has reached over 1 million views on Facebook to date.

Banda Los Traviesos de Joey Camarillo consists of local kids from Iowa who are between 6 and 16 years old. It came to existence in 2017.

“We launched [this project] in February of 2017,” Jose Camarillo, the founder of the Banda explained. “The goal was to teach kids the art of music, so they can understand this art that can help them in the future.”

At the beginning most of the kids, members of the Banda, did not have any musical experience and they did not know how to play instruments. Every week the children come together at least twice a week for practice and on the weekends, they come out to do live performances at various community events. Over time, Mr. Camarillo has become more than a music teacher to these kids, he is also their mentor.

“My long-term goal is to turn these kids into good people,” Mr. Camarillo clarified. “I do not just teach them music, we also discuss values, traditions, culture, roots and other things that are not quite related to music, but that can be important for their formation when they grow up. I also teach them team work and respect for their elders.”

Thanks to Mr. Camarillo these children are forging friendships that would last a lifetime. They are learning and doing something that they love together.

In a near future, Mr. Camarillo hopes that once they expand their selection of the music they perform, Banda Los Traviesos would generate enough income to cover the bands expenses. He also hopes they will make enough money to be able to compensate the children for the hard work they are doing. At the moment most of the presentations they do are from donations, or they simply ask for donations from the audience.

Besides, the eternal problem of paying the expenses, Mr. Camarillo shared that sometimes it is a bit difficult to keep the parents of these children on the same page.

“The most difficult thing has been keeping the parents united so we could have the same vision for the children,” Mr. Camarillo said.

Despite some problems, they keep on playing, singing, learning and above all growing together. Jose Camarillo has big plans for Banda Los Traviesos.

“I hope with God’s help we can get ahead all together,” Mr. Camarillo shared what he hopes will be the future for Banda Los Traviesos. “Together, so we can become a world-renowned band.”

Banda Los Traviesos performed at the DREAM Iowa Latino Youth Summit last March and the Latino Festival in Washington, Iowa in early June. Their latest performance was August 4 at Our Lady of the Americas Festival in Des Moines.

The kids from Banda Los Traviesos de Joey Camarillo might only be starting their journey in the world of music. There will be obstacles and roadblocks that might discourage them, but united by the love of music and a common goal they will be able to overcome any challenge and reach the top. Follow Banda Los Traviesos de Joey Camarillo in Facebook for updates and check out their videos, including the viral video that brought them recognition, in Facebook and YouTube.