Many of you might have seen the political caricatures made by Jose “Pepe” Angonoa in Hola America and Hola Iowa. Even though many of you are familiar with his work, surely, very few of you know this interesting man who makes us laugh through his artwork. Let us introduce you to Pepe Angonoa.
Mr. Angonoa is originally from Cordoba, Argentina, and he resides there with his wife and two sons. Mr. Angonoa commented that he drew all his life.

“I drew since I was a child, I made comic strips, caricatures of my friends and teachers, and later decided to study this seriously, learning the techniques that strengthen [my skills] for this profession,” he said. 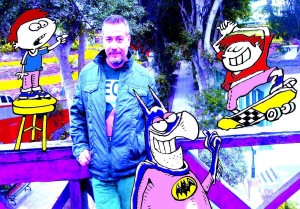 In fact, Mr. Angonoa studied drawing for publicity and graphic design. Professionally, his caricatures have been printed since 1988. His humoristic drawings made appearances in different publications of Argentina, Uruguay, Chile, Brazil, Ecuador, Colombia, Panama, Mexico, United States, Canada, Spain and England.
“I simply continued drawing because this is the only thing I know how to do, I am not good at other things,” Pepe Angonoa shared with a laugh.
Many people believe that to be an artist one probably has to have some kind of inspiration or a muse. Maybe it is true to artists that paint landscapes o do some other type of art that is not caricature. But when it comes to the creation of humoristic drawings this is a little bit different kind of art. Mr. Angonoa draws his inspiration not from a beautiful muse, but from the current events. His artistic process is to read the news and find a humor in the topic.
“Sometimes the news can’t be converted into something funny and I do just an illustration. To find humor is not hard for me, I live with humor, even in the hardest moments of my life I found it,” Mr. Pepe Angonoa told us.
They say that laughter makes our lives longer, but not everyone can see the humor in daily life. Mr. Pepe Angonoa learned to look for positive in the saddest and worst times of his life. Maybe his personal experiences changed his way of seeing things.
“Years ago I was admitted into a neuropsychiatric clinic and because of the drugs I lost myself drawing caricatures, long before that, when I was 19 years old I had to go to war in the Falkland Islands, it was a military conflict that my country was involved in with Great Britain in the 80s, and I used to draw caricatures for my fellow soldiers in the trenches,” Mr. Angonoa shares his personal experiences that, he assured, helped him to find humor in the hardest instances of the life of a human being.
During last two years Mr. Angonoa started to experiment with other types of drawings. He told us that his new concept is different and includes themes that are somewhat obscure and they are done with inks and mixed techniques of painting. Soon he will finish this type of drawings. The series is about clowns and he expects that they will be displayed in the art gallery. Mr. Pepe Angonoa also has participated in some theater workshops and thanks to this he does some advertising on TV and sometimes acts in small films.
“I don’t know if I’ll keep on doing caricatures in the future, but I will not lose my sense of humor,” Mr. Angonoa assured. “I am motivated to continue expanding my work in other latitudes.”
Pepe Angonoa is a man behind a caricature that could find humor in the most difficult situations of his life. While another person might have finished with a broken spirit, Mr. Angonoa held on tight to his sense of humor and it helped him to get over life’s difficulties. Now he shares his humor with the whole world through his caricatures and who knows, maybe his humoristic drawings might help some other person to get over their own life’s obstacles.
Look for the original caricatures made by Pepe Angonoa in every issue of Hola America and Hola Iowa. Follow him on Facebook. Also, he has published humor books and many of them are for children. He has published more than 50 books. His books are usually available at book fairs in Argentina and through Argentinian Yammal Contenidos.