The organizers of the meeting were looking for the Representative to commit to support comprehensive immigration reform and support COVID-19 relief for undocumented essential workers that includes legislation, stimulus checks and vaccines.

The meeting began with three immigrant mothers from Guatemala and Honduras sharing their stories of arrival and how ICE had impacted their families. They asked for the Congresswoman to “please, support the comprehensive immigration bill”. One of the Iowa DREAMers, who also had COVID and has been trying to renew her work permit for months, shared her story as well. After the personal stories were shared, the organizers of the meeting asked Rep. Miller-Meeks if she would support the current COVID relief bill. She indicated she was not in favor of the current bill.

“I will unlikely support the current package. One because only 9% of it is going to the vaccine, vaccine development, public testing and to the public health infrastructure workforce. So, when you have 9% of a 1.9 trillion-dollar bill and 1 trillion dollars of unspent money, it is going to be very challenging for me to vote for this package,” she said.

The Congresswoman added that she supports the stimulus checks, unemployment, continuation of PPP for small businesses and vaccine development, testing and administration. She feels more support is needed for local public health agencies as well.

As to comprehensive immigration reform, the Congresswomen started saying that she feels that there should be more COVID testing on the borders. She added that not only the Southern border, but all borders. She indicated that if the immigration bill would have bipartisan support, she might be more likely to consider it.

As for DREAMers she shared that she does not agree that DACA was done through an executive order. She believes that it should have been a process that should have included members of the Congress.  She indicated that maybe if President Biden would separate the DREAMers issue from the rest of the immigration reform, then maybe her colleagues would be more willing to support legalization of DREAMers. The Congresswoman pointed out that this was her opinion and she has not had specific conversations about this issue with her colleagues.

This meeting ended with Bishop Zinkula asking Congresswoman to consider human rights when deciding on the border enforcement issues.

“Enforcement of borders should include the protection of the basic human rights, dignity of the migrant and not place lives at risk. So, please consider that where the church is at on that. It is just and fair position. The current system is broken, clearly and it needs to be fixed. If you could get help on that, we would really appreciate it.” Bishop Zinkula requested of Congresswoman Miller-Meeks.

The meeting ended with Father Rudy Juarez from Davenport asking the Congresswoman to meet again with the organizers in August of this year. Rep. Miller-Meeks indicated she was willing to have another meeting. 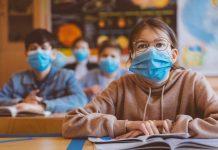