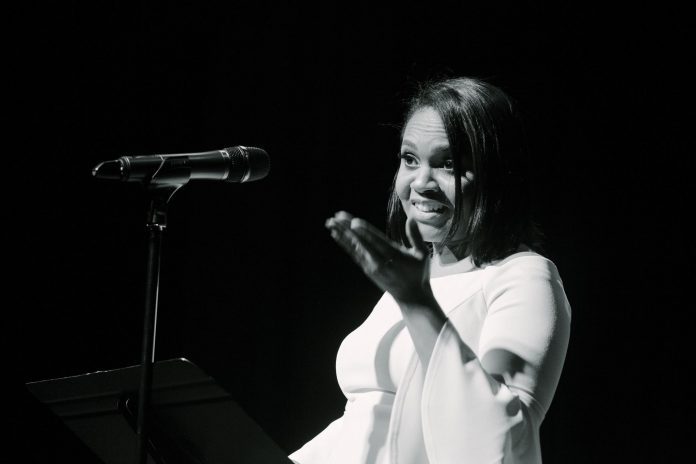 By Christina Fernández-Morrow
Stories to Tell My Daughter, a storytelling event featuring women of color, was birthed from a dream nearly ten years ago. At the time, Teresa Zilk, the producer and creator of the event, had no idea how she would move from dream to reality but the dream wouldn’t let her go. After years of thinking about it, Teresa began piecing her ideas together in 2018. The event debuted in the spring with five storytellers: Lizz Sharp, Alicia Peña, Veola Perry, Claudine Cheathem, and Christina Fernández-Morrow.

Working tirelessly to make her dream come true, Teresa invested her own funds to secure a venue, provide refreshments, promote and produce the event. She began reaching out to potential storytellers in the fall of 2017 with a spring 2018 date in mind. She hoped to fill at least the main gallery of the Thoreau Center in central Des Moines. By the time the event kicked off, the entire first level of the center was filled and the event was a major success. Audience members cried, laughed and shared their own stories with Teresa and the storytellers. Teresa knew she had filled a void in her community and began thinking about a second event.

Today, the event has outgrown its original venue and has become an annual event that packs the house every time. True to her vision, Teresa continues to give women of color a voice. One such woman who will be taking the stage to share a personal story is Claudia Schabel. Claudia, a native of Brazil, moved to Des Moines nearly two decades ago to attend Drake University and has made Iowa her home ever since. She is the owner and president of Schable Solutions, a consulting firm that combines Claudia’s years of experience working on diversity and inclusion initiatives for Fortune 500 companies and her multinational background to create training modules, coaching and best practices for small and large institutions. She was approached by Teresa around the holidays and asked to be a storyteller for the March 2020 production. She shared, “When Teresa asks you, you say yes! With all joking aside, I felt compelled to lend my voice and perspective. Teresa has been doing a great job giving women a voice. These events are empowering and impactful. I want to support her efforts.”

As an well-known leader in the community, Claudia is excited to be a part of Stories to Tell my Daughter, an event that is still primarily funded by Teresa, as well as the tickets sold for the event. Storytellers are not paid, but rather share their stories in an effort to give marginalized women a voice. Claudia, an avid volunteer who gives of her time to agencies such as the City of Des Moines’ Civil and Human Rights Commission; Iowa’s Society for Human Resource Management (SHRM); the Iowa Chapter National Women Business Owner (NAWBO); the Brazilian Cultural Center (BCC); the Iowa Network Against Human Trafficking and Slavery; and  Blank Children’s Hospital in Des Moines wants to be an inspiration to others who have faced challenges in their lives. While she is most excited to hear the stories of the other storytellers, she also recognizes the value of sharing stories as a way to create community. Her intention builds on Teresa’s mission to use storytelling as a means of resistance and activism.

While statistics and facts effectively communicate information, stories bring meaning and emotions that people can relate to. That relationship between a story and the people sharing and relating to it are what forms connections and breaks down stereotypes and barriers to understanding. This is what motivates Claudia and Teresa to invest their time and expose their vulnerabilities on the stage. “I decided to tell a meaningful and vulnerable story. I wanted to challenge myself to share a story that could be helpful to someone else,” says Claudia.

The 2020 event will feature half a dozen women sharing stories of overcoming obstacles, following their hearts and being true to themselves in the face of adversity and challenges. It will take place at the Viking Theater on Grand View University’s campus on the east side of Des Moines and begins at 4pm on Sunday, March 15th. Tickets are $20 and can be purchased ahead of time through eventbrite here or at the door. All proceeds go towards producing the event for years to come to feature more women’s stories and continue to use story to generate bonds that affect social change.

Here is the link for the Stories to Tell My Daughter podcast, to accompany the article: