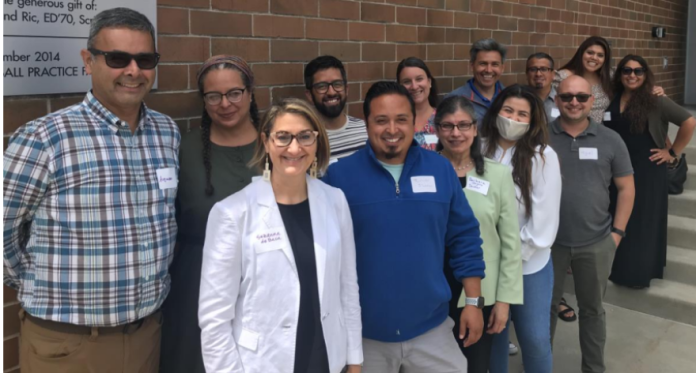 A little more than a year ago, three leaders in the nonprofit and Latino communities founded the Iowa Latinx Project. It’s purpose: to provide a resource to the state that highlights and advocates for the collective impact of Latino communities.

“[The goal is] for all Iowans to see the growth and success of the Latino community as important to them, and understand the significance of a healthy and vibrant latino community in their lives,” founding member Rob Barron said.

Barron founded Latino Political Network, and worked with Al Éxito Executive Director Dawn Martinez Oropeza and the executive director of Iowa Migrant Movement for Justice, Erica Johnson for the launch—which Barron said allows Latinos to have ownership of their own stories.

The project recently released a study called “Nuestro Iowa” that shares the statistics and personal experiences of Latinos in seven counties in central Iowa. Its subsections break down into economics and workforce, housing, immigration, education and health.

And now, the volunteers that lead the project are looking forward to providing statewide data.

Kenia Calderón Cerón is on the leadership team. She said an important aspect of “Nuestro Iowa” was that it was a project about Latinos by Latinos.

Calderón Cerón led many focus groups to gather the personal stories of Latinos in central Iowa ranging from high school to late adulthood. She said throughout the process, she was able to find validation for many of her own experiences. She grew up in Des Moines and said it was helpful knowing her family was not alone in the struggles they went through.

The collaborative leadership team of the project is made up of a diverse group of Latino leaders with knowledge and experience in multiple fields. Calderón Cerón works in the financial sector. Another member, Ana Coppola, works in public health.

“I think that what we got from this report is the understanding of the data on the specific conditions. And how we can do ‘Oh, what resources do we have right now? Or what resources do we need to be able to help the Latinx community to have a healthier life?” Coppola said. “It is important to understand the data and find out what are those, as mentioned earlier, strengths and abilities that the community brings to the entire community, but also looking at those gaps.”

She added it’s important for central Iowa to learn about their neighbors. She explained people need to know Latinos aren’t only immigrants or only work in factories or construction, but they have expertise in many other fields.

The State Data Center does release data about Latinos in Iowa during Hispanic Heritage month is September, but something the Iowa Latinx Project does is feature personal stories to accompany numerical data.

“I think it’s easier as a Latina to assume that everybody knows our story, our realities, but we can’t make that assumption. And so I think that’s why this report is so beneficial for everyone, regardless of their industry, to be aware of, and to also implement some sort of strategy, implement a plan that will make sure that Latinos are included in the type of work that they do,” Calderón Cerón said.

The Iowa Department of Human Rights has called the project groundbreaking. The project has received about $110,000 dollars in financial support from sponsors and donors.

“We want people to read this report and start seeing this community in reality, not the assumptions,” founding member Barron said.

Barron is now stepping back to allow the collaborative leadership team take the lead. On top of the project’s informational mission, Barron also said he’s proud to have helped facilitate relationships among central Iowa’s Latino leaders.

“Everything was very exciting. I really enjoy it: All the conversations that we have between the leaders of this report, talking with the community in general. But I think that seeing the final report, it was very [mind opening] for me. And it really helped me to better understand what we have been doing for the entire year of 2020,” Coppola said.

The project is moving forward in its initiatives, and is actively seeking an additional $50,000 for the remaining costs of a statewide project.