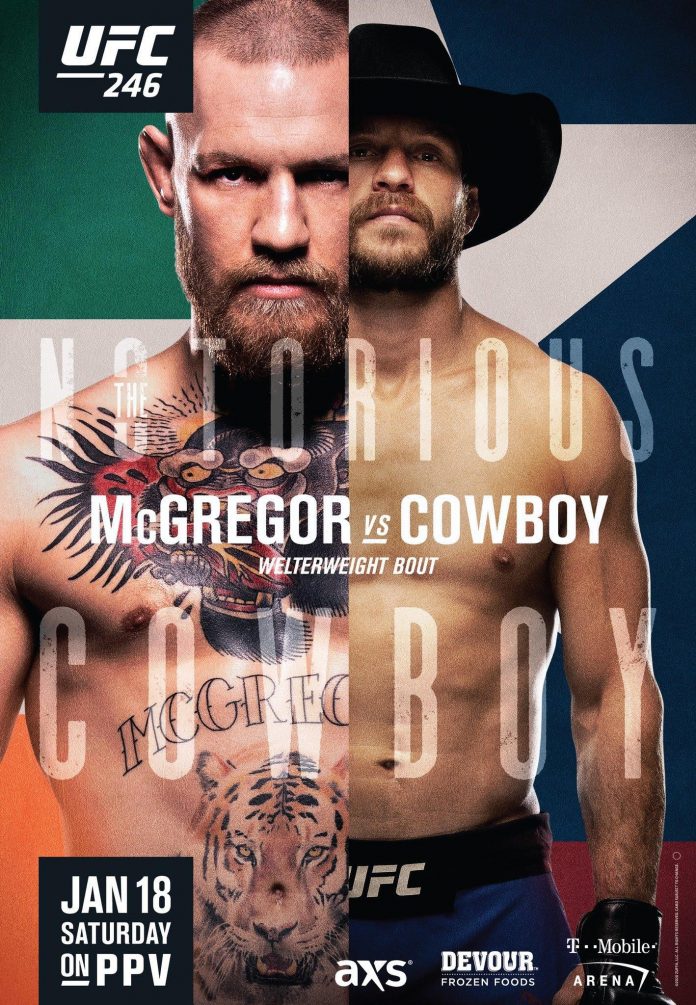 It’s been fifteen months since former UFC lightweight and featherweight champion, Conor McGregor (21-4) has been in the octagon. And that night as well as many nights after that did not go well for “The Notorious” one. Losing that October night to current UFC lightweight champion, Khabib Nurmagomedov, it was the post-fight antics from both McGregor and Khabib that most will remember more than the fight.
After serving his nine-month suspension, McGregor looks to get back to his title winning ways this Saturday night as he will face grizzled veteran, Donald “Cowboy” Cerrone (36-13, 1NC) in the main event of UFC 246 live from the T-Mobile Arena in Las Vegas.

Cerrone fought four times in 2019, going 2-2, with the loses being to Justin Gaethje this past September and Tony Ferguson before that in June. Ferguson and Khabib are set to fight on April 18th in Brooklyn, New York and rumors are floating around that the winner of McGregor and Cerrone will get the winner of that. But with that fight being three months away, which is an eternity in MMA time, anything can happen.

For McGregor, many think that Cowboy is the perfect opponent for him to face his first fight back. Not having to cut down to lightweight gives both fighters the added edge they were lacking at lightweight. And Cerrone is known for his slow starts and this is where Conor flourishes. But many underestimate Cowboy’s ground game which could prove a problem for McGregor as it has in the past versus Diaz and Khabib.

Dana White has gone on record saying that he wants to make 2020 even bigger than 2019. Kicking off the year with a fight like McGregor versus Cowboy isn’t a bad way to make good on those words. Both likely future UFC Hall of Famers, even the casual fan will be tuning in on Saturday night to see who wins this one. And as many fights look good on paper, this one should be undeniably one to remember.