DES MOINES – The League of United Latin American Citizens, Council 307, today spoke out against President Donald Trump’s announcement he would sign an executive order to remove the right of citizenship for U.S.-born children of non-citizens and illegal immigrants.

“This is a blatant unconstitutional attempt to fan the flames of anti-immigrant hatred in the days ahead of the midterm election,” said Joe Enriquez Henry, president of LULAC Council 307. “The 14th Amendment’s citizenship guarantee is clear. You can’t erase the Constitution with an executive order.”

The Constitution’s 14th Amendment was enacted after the Civil War to ensure black Americans who had previously been subject to slavery had full citizenship rights. Through the amendment citizenship is granted to “all persons born or naturalized in the United States.”

The League of United Latin American Citizens (LULAC) is the nation’s largest and oldest civil rights volunteer-based organization that empowers Hispanic Americans and builds strong Latino communities. Headquartered in Washington, DC, with 1,000 councils around the United States and Puerto Rico, LULAC’s programs, services and advocacy address the most important issues for Latinos, meeting critical needs of today and the future. For more information, visit www.IowaLatinos.org or Henry at 515-208-7312. 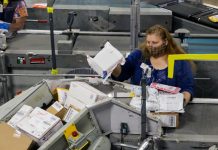