Salvador Lopez was born in Muscatine, Iowa, in 1928. His parents Antonia and Federico Lopez, had come to the United States from central Mexico some years before. During the Depression, the family moved from Fairport, Iowa, to Cook’s Point, where they found a close-knit Mexican community.
In the summer, Salvador and his friends played football and hockey and went swimming in the Mississippi River. “Everybody learned how to swim,” he remembers. “The way I learned was some of the bigger guys—well, they’d take me out to a little island. And they says, we’ll leave you there now. And they left me there, and I had to find my way back.” To earn extra money for themselves or their families, they worked in the fields cutting the tops off of onions in nearby Pleasant Valley. “Felipe Terronez used to have a big truck, and he’d take us out to the onion fields and [we’d] top onions and he’d bring us back,” Salvador says. “I never did like it, but I did it anyway.”

When World War II broke out, Salvador and several of his friends from Cook’s Point enlisted in the military. Though they hoped to serve together, they were sent to different corners of the world—one to Hawaii, one to Japan, and Salvador to Germany. In the army, Salvador faced prejudice from his fellow soldiers, who did not see him as an equal.
“When I got over in Germany President Truman was going to integrate the army…we started having classes on why we should all stick together and so on and so forth. And of course, I already knew that there was prejudice when I seen where the blacks were at. But I hadn’t seen it too much against Hispanics until we were having that class. And then they brought it up, they say, “What’s some of the reasons why we can’t get together?” And this one guy from Texas says, “Well, because the blacks ain’t no good and the Mexicans aren’t no good.” A buddy of mine who was leaning over—we were sitting in the back—and he says, “Hey, Lopez, he’s talking about you.” And I said, “I know.” Well, then, when we come out I said, “Hey, how come you’re better than me? What makes you better than me?” He kind of changed his mind then. I met other ones along the line but you’ve more or less just got to ignore it and keep going.”
Upon his return to Iowa, Salvador hoped to work as a heavy equipment operator with one of the local factories because he had gained experience working with heavy machinery in the army. Yet despite his experience, the local union refused to issue him a union card.
On the job sites, they would say, “Go get that card and you can start to work tomorrow. So I’d go [to the union] and they’d say, “It’s gonna cost you a hundred dollars.” I say, “I got a hundred dollars.” But then they had to come up with something else: “Well, we’ve gotta hire these guys that are laid off.” I said, “Well, I found a job. Why can’t they find a job?” And they said, “No, that’s the rules. We’ve gotta put them to work first.” And they kept telling me that over and over and then I go to a different job site and the contractors would give me a job, but the door that was shutting on me was at the union hall.
Discriminatory practices on the part of the union meant that Salvador continued to work maintenance on the local railroad. But when he applied for higher paying railroad jobs—such as a postal clerk at the freight house—he was turned away. “As long as you stuck in your given whatever was open for you, you were all right. But if you wanted to improve yourself, well, that’s when you ran into the roadblocks,” Salvador recalled. “Whenever there was an opening [at the freight house], why, then I couldn’t get in.”

Salvador eventually left the railroad to work at Sivyer Steel, where he met other Mexican Americans tired of the ongoing discrimination and prejudice in their communities. In 1959, they worked together to establish a local chapter of the League of United Latin American Citizens—LULAC Council 10. “This friend of ours [Jesse Mosqueda] explained to us what it was all about—discrimination and politics and the betterment of the Hispanic,” Salvador remembers. “We immediately got about fourteen [people] and sent the application in and it come back. And that was in ’59. And that’s how we got started.”
As a founding member of LULAC, Salvador was instrumental in preserving LULAC’s records and history. He has also played a key role in the establishment of a LULAC education scholarship fund for college students. Though the fund started off small, it soon grew thanks to the efforts of the many women members of the council who worked behind the scenes selling raffle tickets and raising money for the annual fiesta and queen competition. In 1979, LULAC Council 10 raised $27,000, and the national council matched them dollar for dollar. They raised so much money that the next year, the national organization changed its policy to only match fifty percent of local fundraising. “We were top in the nation,” Salvador recalls. “All these councils down in Texas were only raising a thousand dollars or five hundred. And this little upstart council down in Iowa came up with $27,000!”

This feature on Mr. Salvador Lopez is the second in this series of 3 articles Hola America and Hola Iowa will have in honor of the three remaining founding members of LULAC Davenport in 1959.
Articles are courtesy of the new website called “Migration is Beautiful”.
This website was developed from the Mujeres Latinas Project, started in 2005 at the Iowa Women’s Archives to collect and preserve primary source materials about the history of Latinas and their families in Iowa.
The page http://migration.lib.uiowa.edu/ is now live please visit it and see the history of migration of Latinos in Iowa starting from 1850. 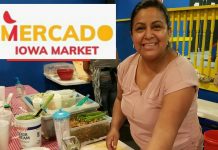