When Justin Favela visited the city to prepare for his upcoming exhibit at the Des Moines Art Center, he was fascinated with, of all things, taco pizza.

Sure, he liked the combination of flavors, but the acclaimed Las Vegas-based artist was more intrigued by how, in his view, it represents “a certain type of regional history. … It really surprised me how it could be a symbol for so many immigrant stories.”

How immigrant cultures connect, mix and assimilate will be a main thread that runs through his new exhibit, which opens July 17 and will feature large-scale, site-specific sculptures and murals created in Favela’s signature piñata style. Made primarily with vibrantly colored tissue paper and a papier-mâché technique, his works typically convey cheery exuberance.

But behind the festive facade, the works tell more complicated stories that reflect the 34-year-old artist’s eclectic interests. For the Art Center installation, he plans to explore his Guatemalan and Mexican roots, his queer identity, the city of Des Moines, the local Latinx community, Iowa agriculture and farm workers, art history, pop culture and cultural appropriation, and the pandemic—plus that taco pizza and other regional foods.

Favela was born in the United States to a Guatemalan mother and Mexican father. Like most immigrant families, “we sought to assimilate and [in the process] we let go of a lot of traditions,” especially those from Guatemala, he said in a recent phone interview from Las Vegas. “I feel like our Guatemalan identity was erased as we became Americanized.”

The Art Center exhibit provides an opportunity “for me to really think about my history … and distinguish the differences between Mexican and Guatemalan” cultures, he says. In fact, Guatemala is one of the reasons behind the show’s title, “Justin Favela: Central American,” which also refers to Iowa’s central U.S. location.

Favela also draws inspiration from his identity as a queer, even if that influence isn’t overtly evident in his works. “I’m not sitting around making rainbows,” he said with a laugh, “but my work is very colorful and is inspired by old Hollywood and flamboyant Vegas queers like Liberace and Rip Taylor.”

Although Liberace never came out publicly, Favela adds, “he decorated himself with feathers and rhinestone—hiding behind that glamorous facade so much that the facade became the reality or a representation of the self. My work is also a type of facade.” That facade is temporary, he notes, as after the exhibit, the pieces will be dismantled and the paper recycled.

In addition to his personal history and experiences, Favela says his work will reflect Iowa and Des Moines. “My work flows from the people and the community,” he says. “I want to highlight the stories of the local Latinx community, even if not in a direct way.”

What’s more, he says, “I want to celebrate farm and factory workers … and focus on the agricultural history of Iowa.”

Agriculture also ties into his love of food, a subject Favela says he almost always incorporates into his installations. “I love doing work about food; it’s a way people share their culture,” he says. Besides taco pizza, he’s especially intrigued by the pork tenderloin, “a quintessential Iowa food but one where the processing for that food is done by immigrants.”

In planning his food creations, Favela says he’s been inspired by the Art Center’s large-scale sculptures by Claes Oldenburg. “I’m obsessed with his giant works of food and other objects,” he says, explaining that given his own works are so site-specific, he seeks to incorporate pieces from the museums where he exhibits.

Favela plans to involve the community through an interactive “victory garden,” a pandemic trend that’s a nod to the patriotic plots of World War II. Throughout the exhibit’s run, people will be invited to make their own paper plants and add them to garden. “I don’t want to completely ignore the fact that this show was postponed because of the pandemic,” he says. “I want to acknowledge the times we’re [living] in.”

Favela also hopes the show fosters inclusivity and draws diverse viewers to the Art Center, especially the Latinx community. “Growing up, I didn’t feel like museums were a place where I was welcome,” he says. “I want Latinx folks to be able to see themselves in the exhibition and for everyone to feel welcome.” 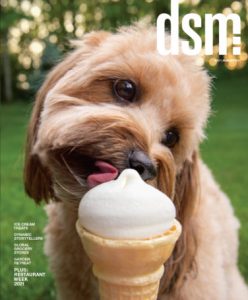 Article originally published in the July / August issue of DSM Magazine now out!