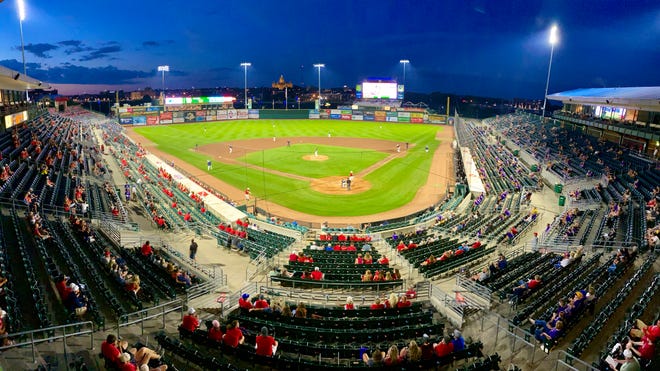 For the first time in over two decades, the Iowa Cubs owners’ suite at Principal Park will have new occupants.

Endeavor, a global sports, entertainment and marketing company based in Beverly Hills, California, announced Wednesday it is purchasing, through the creation of a new organization called Diamond Baseball Holdings, the longtime Des Moines minor league baseball team, the AAA affiliate of the Chicago Cubs. Terms of the deal were not disclosed.

“Opportunities to move into an ownership position of a sport so steeped in history are increasingly rare, and we are confident this will drive meaningful growth in the Owned Sports Properties segment of our company,” said Mark Shapiro, president of Endeavor, said in a news release, adding. “We see tremendous potential to turbocharge these storied Clubs using the scale and capabilities of Endeavor. Our expertise across sponsorship sales, event operations, licensing, marketing and content creation will bring incredible value to these Clubs, supporting communities across the country who form the backbone of the Professional Development League system.”

The sale is a monumental move for the Iowa Cubs, which hasn’t undergone an ownership change since Michael Gartner and his associates purchased the team in 1999 from the family of then-owner Ken Grandquist following his death from a stroke.

Gartner, the chairman and principal owner of the team, is a Pulitzer Prize-winning journalist and former president of NBC News and editor of the Des Moines Register. He later was editor of the Ames Tribune.

Founded as a talent agency in 1995, the new owner, Endeavor, merged in 2009 with WME, the former William Morris Agency, to form WME. That company in turn purchased IMG, a pioneering sports marketing firm, in 2014, and later restored the Endeavor name. CEO Ariel Emanuel is brother of former Chicago Mayor and Obama White House Chief of Staff Rahm Emanuel.

Endeavor operates in more than 30 countries, representing sports and entertainment figures and staging live events, including the Ultimate Fighting Championship and the Miss Universe pageant. Silver Lake, a giant private equity firm that has holdings in numerous sports-related businesses and claims $886 billion in assets, is a significent investor.

Affiliated with the Chicago Cubs since 1981, the Iowa Cubs have been the last stop before the major leagues for many of the organization’s biggest names, including Anthony Rizzo, Javier Baez and Kris Bryant. Hall-of-Famer Ryne Sandberg even managed the team.

But while players, coaches and managers have come and gone, Gartner and his partners have been mainstays. Under their ownership, Principal Park, the team’s city-owned home, underwent major improvements. Some of the biggest included the addition to bleachers in right field, a fountain and new LED lights.

The purchase is the latest  shakeup in Iowa’s minor league scene. The Burlington Bees and the Clinton LumberKings lost their big-league affiliations when the Professional Baseball Agreement, the governing compact between MiLB and MLB, expired in 2020.

The Iowa Cubs, along with the Cedar Rapids Kernels and Quad Cities River Bandits, remain affiliated with big-league teams but must closely follow their requirements in order to retain their ties.

Tommy Birch, the Register’s sports enterprise and features reporter, has been working at the newspaper since 2008. He’s the 2018 and 2020 Iowa Sportswriter of the Year. Reach him at [email protected] or 515-284-8468. Follow him on Twitter @TommyBirch.