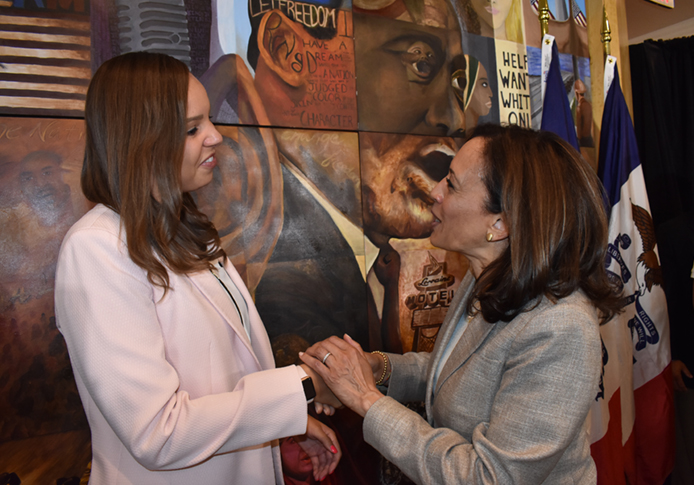 Today, Kamala Harris’ campaign in Iowa announced its African American Steering Committee and to continue growing its engagement across the state, the hire of Mia Mayberry, its new Iowa Deputy Political Director in charge of African American outreach. The committee is made up of African American leaders from across Iowa who will work together with Harris’ organizing team to continue engaging the African American community in Iowa. Mayberry is a Quad Cities native, attorney, and former Vice Chairwoman of the Rock Island County Board of Supervisors.

“We are fully committed to running a campaign that embodies the values that Senator Harris holds. We are better as a country when more people are included and our team has made meaningful, continued engagement with communities of color a top priority throughout this race,” said Deidre DeJear, Harris’ Iowa Campaign Chair.

Harris has made engaging communities of color a key priority of her campaign, and is committed to expanding the caucus electorate to include communities that have not always had a seat at the table. In Iowa, Harris was the keynote speaker at the Annual Black Caucus fundraiser in Des Moines during her first trip to the state, hosted a roundtable discussion in Davenport focused on the issues facing women of color, and joined Urban Dreams and the Des Moines NAACP for a block party in the predominantly African American neighborhood of River Bend.

In addition, organizers and volunteers have traveled to black churches across Iowa to meet with potential supporters, hosted a series of “Unbought and Unbossed” community conversations highlighting the historic nature of Shirley Chisholm and Harris’ candidacies at places such as barbershops and local NAACP chapters, marked Black Women’s Equal Pay Day with policy conversations across Iowa, and more. The Committee will help leverage their own networks and insight to help amplify both Harris and her organizing team’s efforts in the state.

Members of the African American Steering Committee include: