Not since the last Avenger’s movie have so many Marvel superheroes been together in one room. And this weekend at the Donald E Stevens Convention Center in Rosemont, IL, Ace Comic Con brings all your favorite caped characters under one roof along with some other guests from the sci-fi and pop culture world.

Starting today and going through Sunday evening, stars like Game of Throne’s, Gwendoline Christie and Marvel actors, Brie Larson and Tessa Thompson will take the stage early afternoon on Saturday as Spider-Man himself, Tom Holland and Jake Gyllenhaal will close out the day on the main stage. Fans can also check out various artists throughout the day like Marvel Studio’s Director of Visual Development, Andy Park, who will be putting on a demo mid-day.

On Sunday, Game of Throne’s star, Kit Harrington will be on the main stage at noon, followed by breakout stars of Netflix’s Chilling Adventures of Sabrina, Kiernan Shipka and Ross Lynch who will definitely set the mood for one of Marvel’s biggest stars of the last few years, Chris Hemsworth who plays Thor in the MCU. The show will close out with Rocketman star Taren Egerton.

And it wouldn’t be a comic con without a cosplay contest which will be on Saturday afternoon and a kid’s costume contest on Sunday.

For more information or to purchase tickets visit, https://www.acecomiccon.com/events/midwest/tickets.html/ 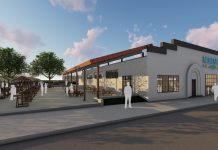