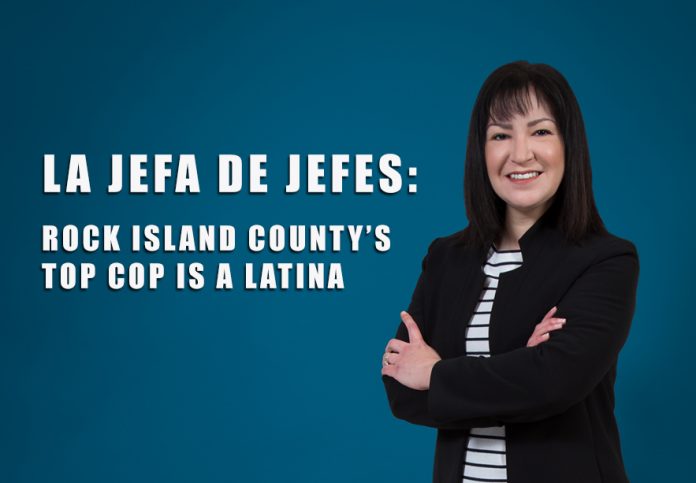 This year she is campaigning for reelection and already she has secured the support of many. She is a first-generation immigrant who is also the first female ever to become Rock Island State’s Attorney* and on March 17 she hopes to win the primary election.

Dora A. Villarreal was born in Illinois in an immigrant family from Monterrey, Mexico.

“I am a first-generation American and the first attorney in my family,” Villarreal shared with pride.

She stated that growing up her family moved around the country and she even spent four years living in Mexico. Once she started High School the family returned to the Quad Cities and the future State’s Attorney started her school year at Alleman High School. After graduating from High School Villarreal attended Southern Illinois University in Carbondale, IL. During her last year of college, where she was getting a bachelor’s degree in Science of Business Administration, Dora A. Villarreal decided to go to law school.

“I decided to go to law school at the very end of college,” Villarreal remembers when and how she decided to study law. “I was undecided about what field I wanted to work in and was eager to continue studying. When a good friend told me, I should be a lawyer, I knew that was exactly the right path for me and I decided to start studying and applying.”

She received her law degree from Hamline University in St. Paul, MN. After graduating she served as a law clerk for a year and then returned to practice law in the Quad Cities area.

“[I] was sworn into the Illinois bar in November 2008,” she shared. “I have been practicing since 2008, and my experience has been mainly in criminal law. I love being in court, arguing cases, cross-examining a witness and reading through reports and evidence. I also enjoy being on the front lines of our criminal justice system. It is a very quick-changing, exciting and fast-paced world. I have always spent extra time doing research and reading to stay on top of new laws and cases.”

She gained this passion for criminal law in 2010 while working with the Rock Island County Public Defender’s Office. In 2018 she worked as an Assistant Public Defender and this was when she also joined Winstein, Kavensky and Cunningham.

“I was, and still am, in shock that I was given such an incredible opportunity to be the first female Rock Island State’s Attorney,” Villarreal shared. “Leading the State’s Attorney’s office is a huge responsibility, and I am so proud to have this role. I take great pride in my work, and now, I have the privilege of representing all of our citizens instead of just my clients.”

State’s Attorney Villarreal said that in order to better understand her new office and how to work better with her colleagues she tries to spend more time in court and tries to do what needs to be done in the office as well.

“I have my own caseload of felony cases, I help in traffic court, misdemeanor court, felony court, assist the civil division, attend all of our County Board meetings and work closely with law enforcement,” she explained.

Even though her day can be extremely busy, she enjoys what she does, and she is working on some changes looking to modernize the way things are done in the office. Villarreal stated that she sees the office moving into the future by becoming more digital and using e-filing more often. She also wanted to share that is working on some big projects that involve finding new resources for mental health, addiction, and juvenile crime.

“Our office is very busy all day long and it can be overwhelming, but I have an excellent team of hardworking prosecutors and assistants who are always giving their best to help me and the office,” State’s Attorney Villarreal praised her colleagues.

Besides being the State’s Attorney Dora A. Villarreal is also the first female President of the Rock Island County Bar Association, member of Prairie State Legal Services Committee, the Scott County Bar Association, the Illinois State Bar Association, and LULAC. She also serves on the boards of NAMI and the Children’s Advocacy Center. And she even finds time to spend time with and raise her 12 year-old daughter along with her husband Nate Neiman, who is also a first-generation attorney in Rock Island.

This year Dora A. Villarreal is running for reelection for State’s Attorney. Her campaign faced some challenges that could have resulted in removal of her name from the ballot.

“When my name was challenged both on the ballot and for holding office, I felt that it was a very targeted attack against me personally.  These types of challenges would not have occurred if I were a male attorney or candidate,” Dora A. Villarreal explained what happened and her reasons for keeping her name the way it is. “I have practiced under my given name, “Villarreal,” since I became an attorney in 2008. One of the main reasons for using my maiden name to practice was to honor my father, who passed away in 2007 before I could be sworn in as an attorney. My father was my role model and a very smart man who worked hard and told me I could do anything I put my mind to. I miss him every day and hope he is looking down on me with pride.”

Thankfully this case was dismissed, and lawyer Villarreal was cleared to continue practicing law as Dora A. Villarreal. The decision was made to keep her name on the ballot as well.

“I am very proud to be the first minority female State’s Attorney. My diverse background gives me a fresh perspective that this office has not had before. This is a time of great change in our country and I am honored to be part of that change on a local level,” Dora A. Villarreal stated.

Dora A. Villarreal’s name will be on March 17, 2020 Democratic Primary Ballot and she asks for your support on that day.

The General Elections will be in November of 2020.