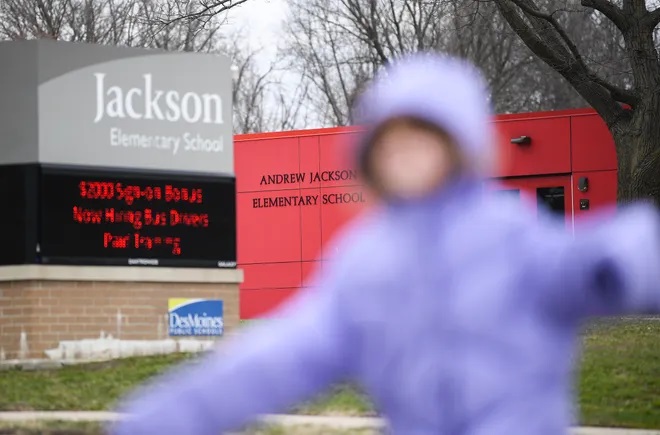 The Des Moines School Board voted unanimously to change the name during its Tuesday meeting. Students launched the name change campaign about two years ago  while researching a class assignment about whether the school should change its name. During a school board meeting last month, Jackson students cited the seventh president of the United States’ owning enslaved people and mistreating Native Americans as just two of several reasons they were advocating for a name change.

The children argued Mary Jackson, NASA’s first Black female engineer, was a better fit in part because the school’s name should reflect its diverse student body.

Mary Jackson’s story was made famous in the 2016 book and film “Hidden Figures.”

“I am happy that it changed and got approved,” Maximus said.

Board Chair Dwana Bradley thanked the students for their hard work.

“It’s very important and valuable and people do listen and pay attention when you use your voices,” Bradley said.

Ahart praised the elementary staff for the work they are doing with students.

“The staff at Jackson intentionally created an opportunity for the students to discuss some issues relative to our history and to equity,” Ahart said. “And students came up with this idea.”

There will be some cost to change the name of school because Andrew Jackson Elementary appears on the front of the building.

Jackson Principal Cindy Wissler has been assured the cost of replacing the sign will not come out of the school’s budget.

Wissler is proud of her students’ hard work.

“Their voices were heard,” she said.