When you step into Santa Cecilia, the town depicted in the new popular Disney Pixar movie, “Coco,” you enter a colorful and lively world. Perhaps it sounds strange to describe an animated movie that deals with death in such a way, but the film is a true work of art that stirs up emotions as we remember loved ones that have passed.

But “Coco” aside from being a very real portrait of the Mexico we know and love, along with its people and family traditions, also manages to take us into a new world. It’s one filled with dead people who are actually still very much alive! 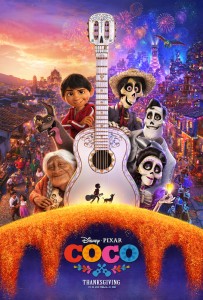 In an interview with co-director, Adrian Molina, he tells us what it’s like to direct an animated film. “What many people don’t know,” he says, “Is that we start with nothing, a blank slate in front of us. We are charged with creating everything from scratch, from nothing,” he shared.

In directing it, he took into account every little detail, which includes using the proper lighting. It was important to cast just the right light on a scene or the faces of the characters in order to produce the desired emotion in the voice actors that would eventually spill over into the characters and into this story about life, death and rich traditions.

For the last four to five years, Adrian has lived in “Coco’s” world while he took part in its creation, he said, and it is something he did not mind at all. He knew that upon accepting this project he would be submerged in that world. They visited many little towns and cities in Mexico, from the pueblos of Guanajuato to the barrios of Mexico City. They talked to people and listened and learned about the different customs. “We wanted to be true to them, and reflect the people and their different traditions because they are different from place to place in Mexico,” said Adrian.

Just like in his work in “Monsters University,” the concept of another world is introduced in a truly age-appropriate way (perfect for all ages). In English, the film informs moviegoers who may or may not know about the different practices and traditions around the Day of the Dead y it does it in a beautifully artistic way. In Spanish, it successfully celebrates and emphasizes these traditions with colorful scenery and music.

Perhaps the most interesting part is that the script is generously sprinkled throughout with Spanish words and popular phrases, making it that more authentic for those wanting to connect with this culture. The main character, Miguel, is played by the young and talented Anthony Gonzalez.

In addition, the cast consists of familiar voices in both versions (English and Spanish), such as that of Gael García Bernal, Benjamin Bratt, Jaime Camil and Cheech Marin. Angelica María, Angélica Vale and Marco Antonio Solís also come together to form this great movie that will make you laugh, cry and remember.