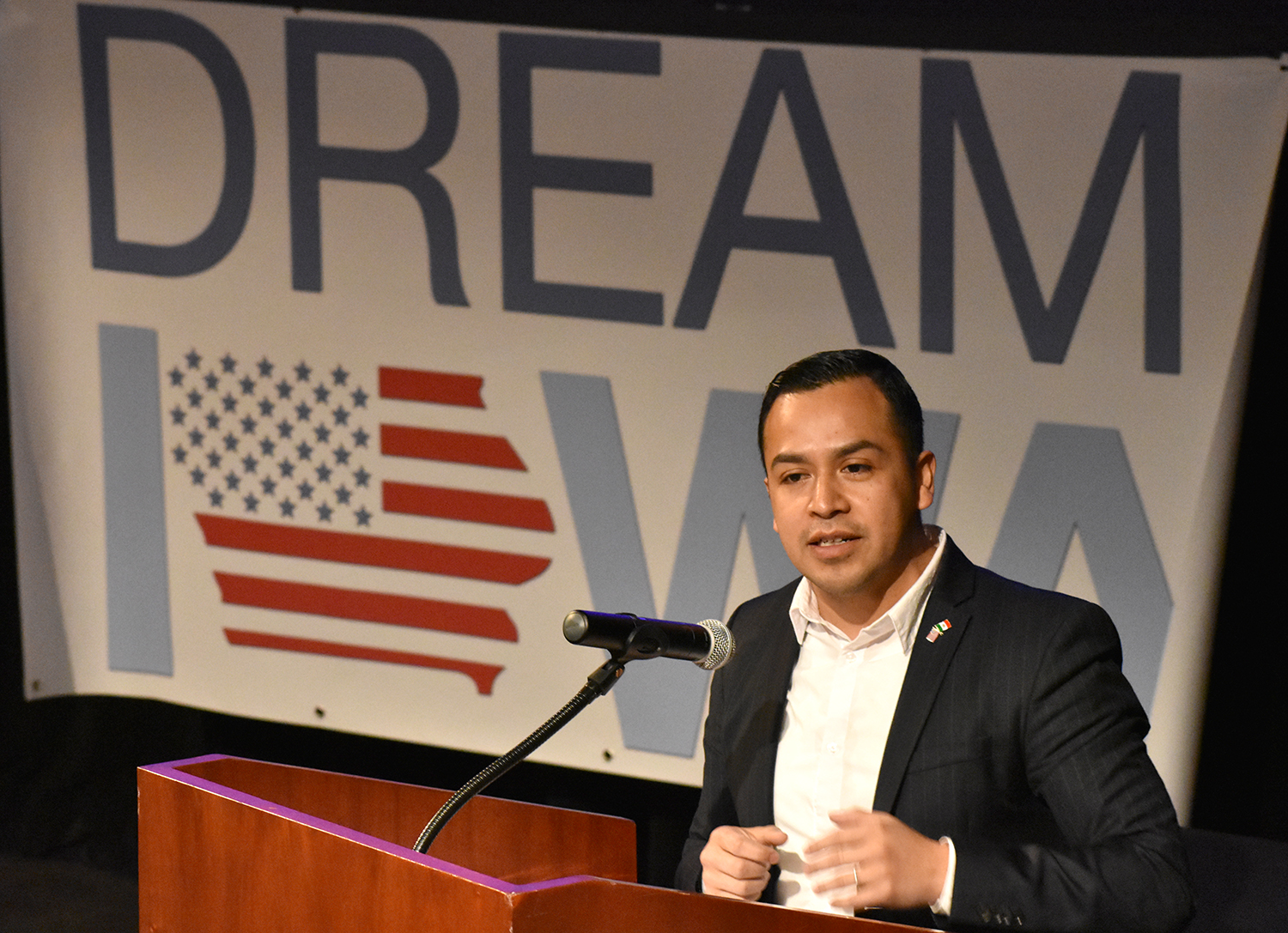 On March 4 of 2018 Grand View University Student Center in Des Moines, IA filled up with young people who came for the 2018 Youth Leadership Summit presented by Dream Iowa. Most of the attendees were young immigrants, many were DACA recipients. They were there to strategize and encourage each other to keep on fighting for themselves and their families and friends who are not DACA recipients. The keynote speaker for that event was Cesar Vargas who gave many words of encouragement and urged young immigrants not to be afraid to use their voice to share their story in their own words.

Cesar Vargas, a young man who came to the United States when he was 5 years old from Mexico, is well known among young immigrants and DACA recipients. In fact, in recent years he became a poster boy, an example of sorts for what DACA recipients are supposed to be like, according to some. After a lengthy legal battle Cesar Vargas became the first undocumented immigrant to be sworn as a member of the New York State Bar in other words he can practice law. His story had appeared in numerous well respected and known publications like The New York Times, New York magazine, The Washington Post among others. Even though Mr. Vargas came to represent all DACA recipients for the American public, he himself is a humble person who travels the country encouraging young immigrants to keep on fighting for themselves and their families. He encourages immigrant to share their stories, like he shared his. In his interview with Hola Iowa Cesar Vargas said the following:

“For me is your story is power. Whether you are undocumented or not. We all have a compelling story. And the reason I am here and I became an attorney, one of the first undocumented attorneys in the state of New York, was because people had my back. I am here to help. But also, reach out and tell your story to your neighbor, to your teacher, to your professor, to the mentor that supports you. Because I did because people had my back. And people will have your back. Just remind yourself that your story is very powerful. And once you embrace your story literally the limits are erased.”

Mr. Vargas was very passionate about inviting immigrants to raise their voice and tell their stories. He explained that he strongly believes that immigrants should not let any politician, advocate or anyone else out there to be the ones telling the stories of immigrants. According to him that was the reason why the national debate over immigration shifted from comprehensive immigration reform to protecting a small number of DACA recipients. As he pointed out during his interview the politicians found the way to divide immigrants and pitch them against each other.

“You know I would say that definitely we have lost leverage as a movement. And this is the culpability that does not lay in the community and DREAMers. It really lays on our political leaders and it lays on the advocates in Washington, D.C. Where we were fighting for 11 million people, our 11 million brothers and sisters, and now we are only fighting for 800,000 DACA recipients,” Mr. Vargas shared his view of the divisions in the immigrant community during our one on one interview.

As a DACA recipient himself, Cesar Vargas signaled to all other immigrants who felt that DREAMers themselves are too focused on their path to citizenship and are forgetting of their families, friends and other immigrants that he and those who are with him are never going to stop fighting for them.

“The end point that we are not choosing a Green Card for DREAMers in exchange for criminalizing and throwing other immigrants under the bus,” Mr. Vargas assured. “We have seen very clear that it is a toxic deal to accept something that is going to protect DREAMers and it will target Central American children, jornaleros, the LGBT immigrant community and that’s a deal we cannot accept. If that’s the deal, we are not gonna get… we are not gonna accept a hostage situation that the administration who wants to protect DREAMers in exchange of targeting everyone else.”

“So, while we are talking about the DREAMers. It is one thing to say we love the DREAMers. We love Cesar because he speaks English and he is a lawyer. He is a good immigrant. But you know what, that implies what? There are bad immigrants,” Mr. Vargas told with a passion and a sprinkle of anger in his voice. “That our parents are at fault. That my mom is at fault. Well, I can tell you this. I will never blame my mother for giving me a better life!”

Although the national debate about immigration is centered now around DACA recipients only, Mr. Vargas believes it can be changed and turned back towards comprehensive immigration reform.

“So, I think that definitely the conversation has been hijacked by the political games that are happening in Washington, D.C., but also for me whenever I go anywhere, whether it is speaking with the Republican leadership in Washington D.C. or speaking with my own Republican congressman in the state of New York or people working here in Iowa, the elected officials in Iowa, that we need to make sure we are creating a movement, a fight, that is creating a political capital on protecting 11 million undocumented immigrants,” he explained during our interview. “Ultimate our loyalty has to lay with our families and our communities. And once we are able to establish that we cannot let them divide us because once we say well, I will accept this but if I accept it my mom could be deported then they are already dividing us. Ultimately, how we can do this is and truly bring significant change. Not just in Washington, D.C., but here in our states and local cities.”

More than anything Mr. Vargas said that immigrant communities can defend themselves form current the administration and the assault tactics it is employing against them. Immigrants have been organizing rallies for at least 10 years and according to Mr. Vargas, it is in fact very important “to be vocal and visible,” but he also urges everyone “to elevate themselves.”  He explained that registering to vote is important, but what change can one do with the vote if they do not believe in a candidate presented to them. That is why Mr. Vargas encourages everyone to step up and not be afraid to take over various leadership roles in communities and organizations.

“I traveled to 44 states and the reason I tell them do not wait for someone to step up for you, don’t let anyone to speak for you. You can do it yourself,” he advised. “You can do it yourself. No matter whether you are attorney or not, whether you are college student or you are high school student you can… you can be the voice of your community and I don’t think it has to be Congress. It can literally be a school board position, it can be a district attorney position, could be a state senate and because of what I have seen, you know, people say I don’t want to vote if I am not seeing my own community out there. And I think once the next position is truly retaking that power of this nation for us, for our community and the future.”

Cesar Vargas is more than a face of DACA and a New York lawyer. Cesar Vargas is a leader that speaks to the hearts of young immigrants. While traveling the country and encouraging immigrants to speak out and share their stories, he is creating a movement, he is fighting for all immigrants.