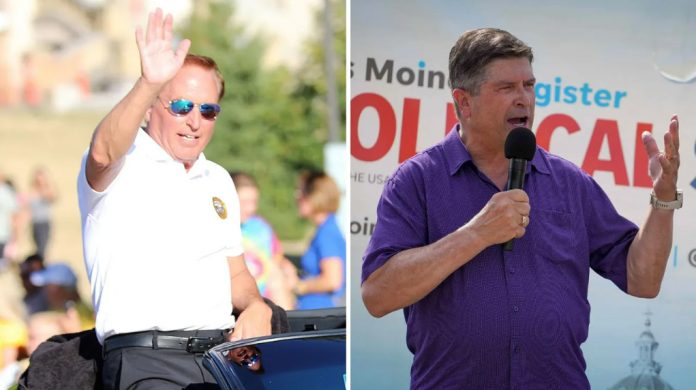 Two longtime Iowa election officials are competing for Secretary of State, a position with newfound visibility in the wake of 2020 election misinformation.

Incumbent Secretary of State Paul Pate, a Republican, and Linn County Auditor Joel Miller, a Democrat, have both spent more than a decade conducting elections in Iowa. They have clashed in their current roles and now they are running for the same position.

The politics of running elections have become even more fraught after former President Donald Trump stoked unfounded accusations of election rigging in other states following his 2020 loss. Iowa lawmakers, in recent years, have also approved new voting rules and restrictions the secretary of state must enforce.

Pate and Miller have grounded their 2022 campaigns in the changing landscape of Iowa election laws — and their ensuing disputes over it.

This election isn’t the first time Pate and Miller have battled.

The two disagreed on election law issues in 2020, leading to a legal battle between Miller and the Trump administration.

In the throes of COVID-19 pandemic, Pate announced he would send blank absentee ballot request forms to millions of registered voters in Iowa. He got special permission from the Legislature to do so in July, ahead of the November 2020 presidential election.

But plans were already underway in some Iowa counties to send out absentee ballot request forms with partial voter information filled in. Pate instructed county auditors not to send out prefilled forms: He said it was against the law and risked exposing confidential information.

Miller, a Democrat, sent the prefilled forms anyway to about 140,000 voters in Linn County.

“I feel it was the right decision at the time,” Miller said, pointing to the high turnout in 2020. “I did not degrade the security or the integrity of the election by what I did.”

The absentee ballot dispute led to a legal fight between Miller and the Trump campaign — a losing battle for Miller — and the passage of new legislation banning county auditors from sending absentee ballot request forms to all registered voters.

Pate said the secretary of state should serve as a “referee,” administering the law as written.

“All due respect to Mr. Miller, maybe he might want to run for the Legislature so he can help write the law,” Pate told the Des Moines Register. “But when you’re administering it, you follow the law.”

Miller said the 2020 dispute inspired him to run against Pate, with aspirations to “make voting easy again.”

Leaders of the measure described it as an election integrity measure, meant to make voting more uniform across the state. Democrats argued it would make it more difficult to vote.

Although the secretary of state never formally lobbied for or against the bill, Pate said his office offered technical advice on the legislation.

“I think the majority of what they did was reflective of what the constituents were asking for,” Pate said. “I don’t see anything that they passed that was going to be a significant detriment to any of the election process.”

Miller disagrees. He said the law was based on “misrepresentation and rumor” about election issues in other states.

“Normally, Iowa laws are made to address Iowa issues,” he said. “There were no Iowa issues with our elections.”

In opposition to the 2021 law, Miller proposed ambitious changes to Iowa’s voting process. He called for the automatic voter registration of 17-year-olds, ballot drop boxes allocated by population, and the option to request absentee ballots permanently, rather than for each election.

However, those significant changes would require action by the Republican-led Legislature and Republican Gov. Kim Reynolds.

Miller said he would use the Secretary of State’s office as a “bully pulpit,” lobbying against any new laws that are “detrimental to the interest of the voter.”

Miller said, if elected, he could make some changes independent of the Republicans, such as printing absentee ballot request forms in newspapers and requiring county auditors to operate during a certain number of early voting hours.

“We’re going to increase the availability for people to vote in your county, and I could do those things as the secretary of state,” he said.

Pate promises to combat misinformation from 2020

Pate has maintained Iowa’s 2020 election was secure, but he said his next term would be focused on dispelling myths about election fraud.

A Des Moines Register/Mediacom Iowa Poll from Nov. 2021 found that nearly one-third of Iowans doubted the results of the 2022 midterm elections would be counted correctly across the country.

“Our work is not done with respect to dealing with misinformation, disinformation and educating the public so they have the confidence in our system,” Pate said.

Pate said he reminds voters that Iowa uses paper ballots and requires voters to show identification at the polls.

“The more you drill down when you ask people in Iowa about election integrity, they’ll come back and tell you that they believe our elections are in fact, good elections,” Pate said. “And maybe we’re skeptical about some others, but I feel good about what we’ve done here.”

Miller took aim at Pate for associating with Trump and working for Rudy Giuliani’s presidential campaign in 2007.

“Find where Paul Pate has said something against what the election-deniers are saying,” Miller said. “He has added to the problem by being silent.”

“The last thing I want to see happen is not believing that the person who won is the winner, because (if) that happens, our democracy has crashed,” Pate said.

Katie Akin is a politics reporter for the Register. Reach her at [email protected] or at 410-340-3440. Follow her on Twitter at @katie_akin.