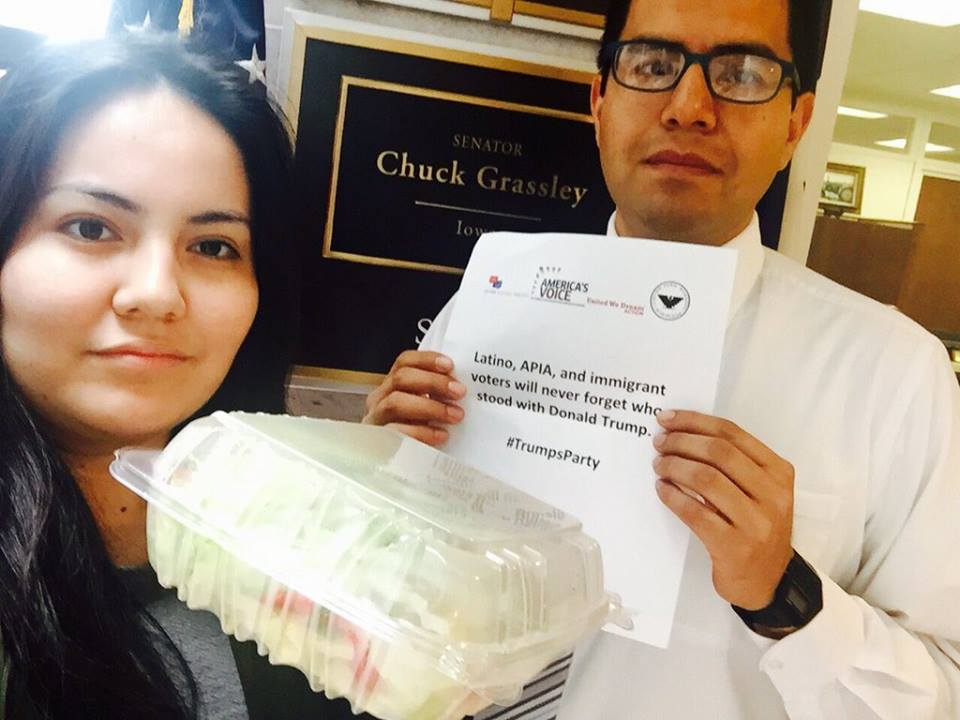 Washington, DC—Today, Donald Trump is meeting with lawmakers on Capitol Hill. On the very same day, the Senate carry out is serving taco salad bowls for lunch—a fitting reminder of the recent “hispandering” that Trump, the most anti-immigrant and xenophobic presidential candidate in modern U.S. history, has engaged in. As Republican politicians increasingly line up in support of Trump as their Party’s presumptive nominee, immigration advocates are delivering taco bowls to the offices of key Senators and House Members planning to stand alongside Trump in November.

The groups delivering the taco bowls today were among those involved in delivering cantaloupes to 224 House members who voted with Steve King to defund DACA in 2013 and Thanksgiving dinner to GOP House leadership in 2013. Actions like the one today are a welcome reminder to Republican politicians that the same immigrants they are pledging to deport, are often the ones putting food on their table.

Said Lynn Tramonte, Deputy Director of America’s Voice and director of Ohio’s Voice “Senator Rob Portman has made it clear that he’s with Trump, so he should enjoy this taco bowl we’re dropping off today.  While he’s eating it, I hope Senator Portman thinks about the men and women who harvested the tomatoes and lettuce, prepared the meat and fried the shell, and put it all together for him.  Many of them are immigrants.  If Trump is elected and Portman is re-elected, these immigrants could be deported.  That’s the stark choice we face in this election.  Latino, APIA, and immigrant voters are not going to sit by while the Party of Trump denigrates them, diminishes their contributions, and deports their loved ones.”

“From day one Trump has been mischaracterizing and insulting our community, and sadly the Republican Party has followed him down the same anti-immigrant rabbit hole,” said Cristobal Alex, President of Latino Victory Fund. “With Trump at the head and on the ballot, the Republican Party will suffer more losses than expected. These taco bowls should serve as a reminder to Senators who support Trump, that the Trump effect will be felt in down ballot races. Latino and immigrant voters will hold Trump’s Party accountable.”

‎”Does the likely Republican Presidential nominee Donald Trump fail to recognize the people who feed him? It’s the work of farm workers who  feed Trump and the nation,” said a United Farm Workers vice president, Giev Kashkooli. “We feed you Trump! But we won’t vote for Trump or any Republican who stands with Trump and disrespects us and the work we do feeding America.”

Taco bowls were delivered to the offices of the following members: