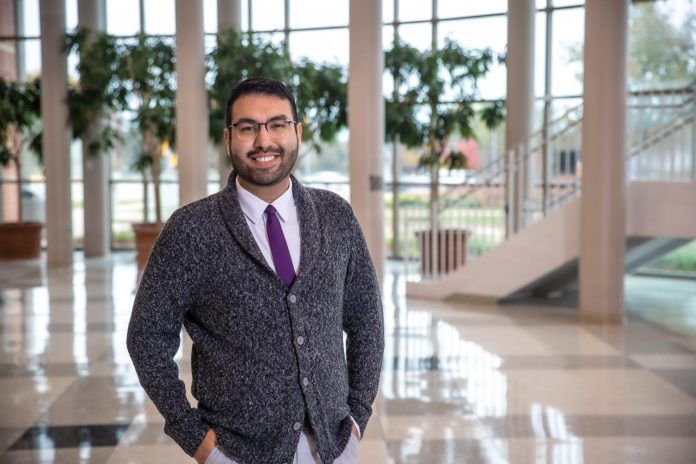 By Nixson Benítez, Courtesy of The Northern Iowan

Jesús Lizárraga-Estrada is the Associate Director of Freshman Recruitment and Access here at the University of Northern Iowa. He oversees the freshman recruitment, diversity recruitment and campus visit programs.

Lizárraga-Estrada is also a first-generation college student and understands the process of being the first in a family to go to college.

“College is a maze that you only know how to get out of if you already have experience. You have to keep up with the deadlines, and some students think they have to commit to the school and the scholarships, which is not the case,” said Lizárraga-Estrada. “Once you get here, there is another maze, and the point is about getting through UNI! The point is graduation.”

Lizárraga-Estrada chose UNI when he was at a college fair and saw an admissions officer who not only answered his questions but was proactive in showing him the next steps.

When Lizárraga-Estrada began his career at UNI, he was impacted by UNI staff member Juanita Wright.

At the time, Wright was serving as the university’s first multicultural recruiter. Later, she became the Assistant Director of Multicultural Recruitment, worked in the Office of Financial Aid and Scholarships and served as Multicultural Outreach Director.

“I had never met a Latina in a leadership role. Wright has really impacted me,” said Lizárraga-Estrada.

Lizárraga-Estrada majored in human resources and was also involved as a tour guide with Student Admissions Ambassadors (SAA). Following graduation, Lizárraga-Estrada was informed by Jenny Connolly, who now works as the Associate Director of Advising in the College of Business, about a potential opportunity working with Multicultural Recruitment in the Office of Admissions.

“This kind of sparked of my interest, and this job called me, and it was a blessing in disguise,” said Lizárraga-Estrada

Since he took on this position, Lizárraga-Estrada and his team have restructured the application process, including addressing language barriers with families whose primary language is Spanish.

“We have four staff members in admissions who are bilingual. One works with transfer students, (and) the other three are on the freshman side,”  said Lizárraga-Estrada. “We’ve done a great job in diversifying our staff, and we’ve seen an increase of Latinx students going to college. With that, how do we get students involved as well as the parents?”

The admissions team is committed to minimizing the maze of the college process, as well as creating conversations between parents/guardians and their children.

Even before the pandemic led many universities to waive score requirements for standardized tests such as the ACT, Lizárraga-Estrada and his team had made that change.

“We restructured our scholarships in 2019 (and) eliminated ACT, and this was prior to (COVID-19). We were ahead of the curve,” said Lizárraga-Estrada. “UNI… recognized testing was a barrier for (some students). Students can still report it, but they are not required to.”

Throughout the pandemic, Lizárraga-Estrada recognizes the barriers of distance, transportation and lack of resources.

Zoom has presented itself as an accessible option for campus visits and has even allowed students a more personalized experience of getting to know UNI. Now, as vaccinations are rolling out, Lizárraga-Estrada is looking forward to once again sending out recruiters to start traveling and bring UNI to students.

As a first-generation student, Lizárraga-Estrada strives to eliminate barriers in the admissions department. He shared one of his favorite quotes: “Help others achieve their goals and you will achieve yours.”

According to current UNI students, Lizárraga-Estrada truly lives by this quote.

“He inspires me every day to get better and do better. I hope one day to one day be able to pay forward everything he has done for me and taught me,” said political science major Yadira Guzman. “He is truly one of a kind, and I will never be able to thank him enough for the immense and profound impact he has had in my life.”