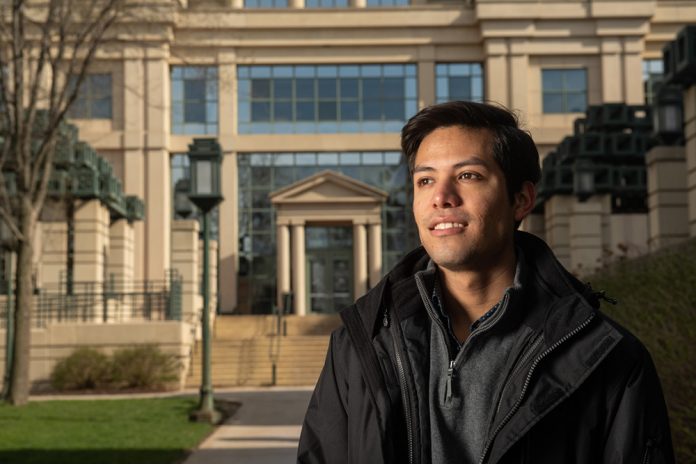 Whenever Jose Duran encountered a hurdle growing up, there was someone—a family member, a teacher, his boxing coach—to help him over it. Now the graduating University of Iowa student wants to be the one who helps others over their hurdles.

Jose Duran was a scrawny 16-year-old kid staring up at what seemed like a monster in the ring at the Des Moines Police Boxing Club. It was Duran’s first career fight, and his opponent was 10 years older, several inches taller, and a whole lot faster.

“He had every advantage,” Duran says. “It was a boy going up against a man. Literally.”

But his coach, John Saunders, the Des Moines police officer who managed the club, had trained him to look for his opponent’s weaknesses instead of worrying about how your own strengths match up. He took Saunders’ words to heart, because Saunders was as close to a father figure as he had just then, as his own father was stuck in Mexico waiting to immigrate.

“I had no parental guidance, no adult at that point in my life I could go to for advice, but I was lucky because I had a boxing coach,” Duran says of Saunders, a 1985 University of Iowa graduate.

Duran took Coach Saunders’ words to heart that day, and early in the bout detected a weakness in the monster. He relied only on speed and strength, and didn’t seem to offer much in the way of strategy or analytical skills. Duran realized that if he out-thought his opponent, he’d have a chance to win.

So he started thinking, analyzing the monster’s game, finding his weaknesses and waiting to exploit them.

“And I beat him,” Duran says. “I blew him out of the water. It’s still one of the highlight moments of my life.”

In some ways, Duran’s whole life has been like that—a kid who had every reason to give up, but used his strengths to find a way to win and move forward. That never-quit attitude is helping him to graduate this spring from the University of Iowa, with bachelor’s degrees in economics and finance from the Tippie College of Business.

But trying to figure out how to beat bigger, stronger boxers was just one hurdle Duran had to overcome to get to where he is. He was born to undocumented immigrants from Mexico who returned to their home country when he was in eighth grade with the expectation of returning legally. But after returning to Mexico, they found out that they would have to wait 10 years before they could return to the U.S. They remain in their little village in Mexico, where they own a convenience store, waiting to come back home to Iowa.

Duran stayed with them for one year in Mexico, attending eighth grade in the local school even though, having grown up in the United States, he couldn’t speak more than a few words of Spanish. But with the help of a kindly teacher, he was able to quickly master it. By the end of the school year, he was one of the best students in the class, and today can speak fluently in 10 dialects of the language.

He returned to Iowa after that year to attend Des Moines East High School, living with his sister, Diana, a single mother with two children of her own, who had also taken in their brother and raised the entire family on her single income. It was around this time that he met Des Moines entrepreneur and philanthropist Bill Knapp, who was a benefactor of Duran’s boxing club.

“I was outside the club one day and he pulls up in a Ferrari, and when I found out what he did for a living, that’s when I started to think I’d rather go into business than box professionally,” Duran says.

Eventually, with Saunders’ continued encouragement, Duran decided to pursue his business interests in college, first at Des Moines Area Community College, then coming to Iowa for his junior year.

“I was fortunate to have influential people and a great mentor who showed me what was possible,” he says, listing in particular Saunders, his sister, his teacher in Mexico who taught him Spanish, and his father. When the family was still together in Des Moines, Duran says his father would go to work at a chemical plant in Des Moines every day at 5 a.m. and still find time to play baseball when he got home at night.

That run continued when he came to Iowa, where he says he received vital guidance from Gabriela Rivera, assistant director for diversity, inclusion, and student success in the Tippie College. She encouraged him to join BizEdge Mentoring Program, which connects business majors from underrepresented groups with professional mentors.

She also helped him get involved in Tippie Gateway Summer Program, which introduces university life to high school students from backgrounds underrepresented in business and shows them that they, too, can succeed in college. As he was once in their position, Duran says it only made sense to be a mentor to them.

“Jose has worked very hard to make sure he’s connected and is active with his mentors, and he wants to help others build their connections,” says Rivera. “He’s learned that when you’re in the right place with the right people, and you know what you want to do, you can go anywhere. He wants to share that with others.”

Duran also credits finance faculty members Jon Garfinkel and Jeffrey Hart for inspiration, and Todd Houge, the adviser of the Krause Fund, in which Duran was a student manager. The Krause Fund is a real-money investment fund managed by finance majors, requiring students to research the economy, industries, and companies, and then use their understanding to forecast financial statements, build valuation models, write an analyst report, and defend their recommendation before a panel of professionals.

“Jose has a unique, intellectual curiosity that became evident very early in the semester,” says Houge. “He was not just interested in figuring out the answer to complete an assignment, but rather, he genuinely wanted to understand the big picture of how the course concepts applied directly to the real world. He wanted to learn, and he seems fascinated by the world around him. He asked questions that showed he was thinking in depth about the material, but more importantly, he listens to the answer. At times the workload in this course can be overwhelming and stressful, but Jose seemed to truly enjoy the grind and how all of the pieces fit together.”

On top of his success, he’s graduating with almost no student loan debt. A combination of scholarships—including a prestigious Carver Scholarship—and summer jobs will allow him to graduate with only a single student loan.

After graduation, he’ll become a commercial banking analyst with Wells Fargo, working with mid-market companies from the bank’s Omaha office. He hopes to continue as a mentor, as well, especially for Latino business owners.

All of that success, he says, can be traced back to that day against the monster and inspiration from Coach Saunders.

“Boxing provided me with structure and discipline and changed the trajectory of my life,” he says. “Coach Saunders told me, a skinny kid, that I could be a good boxer. When I did, it made me think I could do anything. The reason I went to college is because of him.”