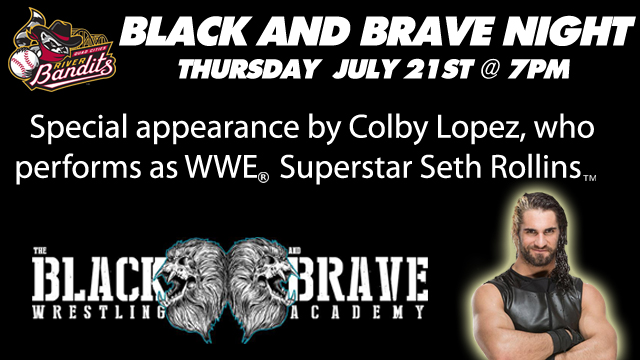 DAVENPORT, Iowa – Colby Lopez, who performs as WWE® Superstar Seth Rollins™, will make an appearance at Modern Woodmen Park for Black and Brave Night on Thursday, July 21, when the Quad Cities River Bandits host the Dayton Dragons at 7:00 p.m. Central Time. Lopez, who is a Buffalo, Iowa native and current Davenport, Iowa resident, started Black and Brave Wrestling Academy along with Marek Brave in 2014. Lopez, performing as Seth Rollins™, was the 2015 WWE® Superstar of the Year.
Black and Brave night, sponsored by Black and Brave Wrestling Academy, will feature pregame wrestling matches on the left field deck. The matches will be performed by graduates of Black and Brave, who now wrestle under Scott County Wrestling. Academy owners Brave and Lopez will be at the ballpark to give a pregame interview meet fans on the concourse and provide information on Black and Brave Wrestling Academy. Lopez and graduates of the academy will also be throwing out ceremonial first pitches before the game.
“We’re really excited to have such a prominent member of the Quad Cities community join us at the ballpark,” said River Bandits General Manager Andrew Chesser. “Colby is a great example of the grit and determination that the Quad Cities stand for and we’re proud to serve as a platform for him to personally impact the lives of our fans and community members.”
Lopez, who still trains at Black and Brave Wrestling Academy, signed with WWE® in 2010 and debuted on the main roster in 2012. Performing as Seth Rollins™, he has been a World Heavyweight Champion, United States Champion, Tag-Team Champion and the winner of the 2014 Money in the Bank™ ladder match. The 30-year-old Lopez began his professional wrestling career on the independent circuit in 2005 with Scott County Wrestling.
Tickets to the game on Thursday, July 21, are available now and can be purchased online at riverbandits.com, over the phone at (563) 324-3000, or at the Modern Woodmen Park box office. For more information on the appearance by Lopez, contact Samantha Nicholson at (563) 333-2741 or [email protected]