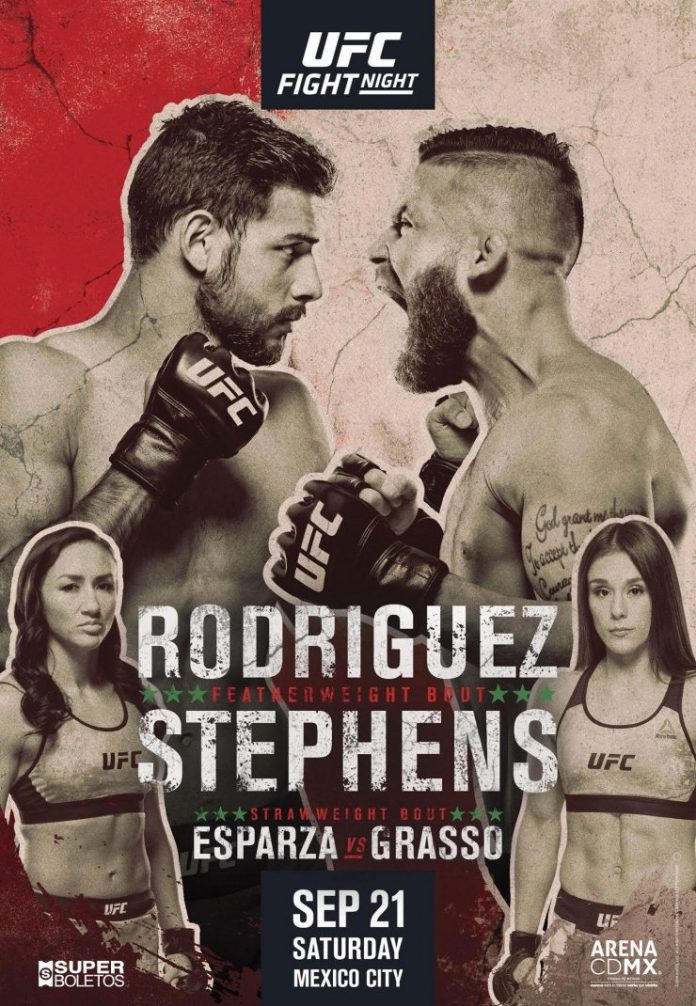 As the UFC has been trying to break into the Hispanic market for over a decade now, the stars may have finally aligned for them to do so this weekend as for the sixth time in the organizations history, they will travel to Mexico for UFC Fight Night: Rodriguez vs Stephens this Saturday night on ESPN+. With Mexican Independence Day being last Sunday, the UFC hopes the celebration will continue into this weekend as they host some of the biggest and best Latin names under the UFC banner.

Walking to the cage 3-1 in her last four fights, Team Lobo member, Irene Aldana (10-5) will welcome Vanessa Melo to the UFC. Coming up short and losing in a decision to former title contender, Raquel Pennington in July, a win on Saturday will help her continue her climb in the women’s bantamweight division as she sits at the number ten spot now.

The last time the UFC was in Mexico was two years ago and Brandon Moreno (15-5) was the headliner. The outcome did not go his way versus Sergio Pettis that night and after another loss last year, he was released from the organization only to be called back a year later for this fight in his hometown against Askar Askarov who will be making his debut that evening. With current flyweight and bantamweight champion, Henry Cejudo bringing so much attention to the flyweight division lately, a win by Moreno will definitely put him back in the mix of potential future opponents for the champ.

After her dominant win over Karolina Kowalkiewicz this past June in Chicago, Alexa Grasso (11-2) finally had the fight in the UFC that she wanted and the one that everyone was waiting for her to have since she made her debut in the UFC in 2016. As she faces former strawweight champion, Carla Esparza (15-6), Grasso’s wrestling will be put to the test. A win over Esparza could definitely find Grasso in title contention talk in early 2020.

This card would not be complete without a spectacular main event. And on paper, you couldn’t ask for a better featherweight matchup as Mexico native, Yair Rodriguez (12-2) and grizzled vet, Jeremy Stephens (28-16) hope to end what should be one of the most entertaining events of the year. Rodriguez is coming off what most think was 2018’s knockout of the year over The Korean Zombie and with Stephens knocking out three of his last four opponents; this fight should have the fireworks to put a cap on the UFC’s return to Mexico and Mexican Independence week.