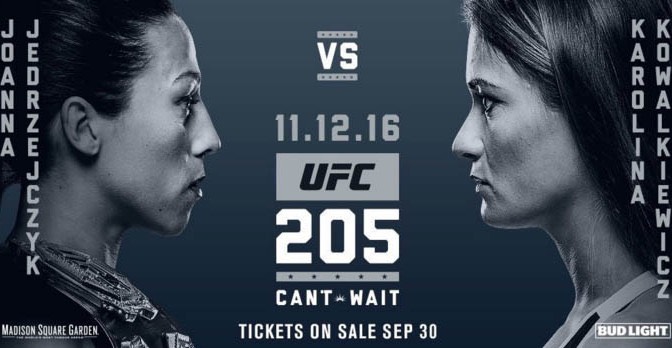 UFC strawweight champion, Joanna Jedrzejczyk (12-0) has made being champion seem pretty easy in her division, so much so that fans and media alike have grown pretty used to calling her by her nickname, Joanna Champion. This weekend at UFC 205 live from Madison Square Garden in New York City, she will be putting her title and unbeaten record on the line once again but this time against another fast rising Polish star, Karolina Kowalkiewicz (10-0) who is also undefeated in her MMA career. “In Poland this is a very big thing,” explained Joanna. “Two Polish fighters, we fight on the biggest event in the world. So this is something big and people are very happy and excited.”

This is not the first time that Joanna and Karolina have met either. They fought back in 2012 as amateurs with Joanna earning that win, but she admits to that being a long time ago and this fight being very different for them both. “It was my first or second amateur fight, same with her,” said Joanna. “She proved that she can join the UFC and won with Rose who was supposed to be my next challenger.”

As her last fight was at UFC 200 after a long strenuous TUF season opposite Claudia Gadelha, Joanna seems unfazed from the bright lights and attention that come with fighting on such a big cards like UFC 200 and 205. It was in that fight with Gadelha at UFC 200 that in the opening rounds looked like the title could have been taken from Joanna. “People have said so many times that there is nobody that can take the belt from me,” said Joanna. “That isn’t true. I keep my eyes open and train very hard because there is a lot of talent in this division.”

With UFC 205 being such a big card for many different reasons like it being the first UFC event sanctioned in New York City, three title fights on the main card and pretty much on paper is the most stacked card in UFC history, for Joanna, fighting on the card means something more to her than all those reasons combined. “I’m very happy for Karolina, for all of us, for Polish MMA and this is going to be a historical moment for the female MMA in Poland, and for MMA in Poland,” explained Joanna. “But, I will win this fight and you’re going to be surprised how I am going to win this fight.”

Joanna Jedrzejczyk will face Karolina Kowalkiewicz for the UFC strawweight title at UFC 205 from Madison Square Garden on Saturday, November 12th only ET/7pm on Pay Per View. 10pm ET/7pm PT