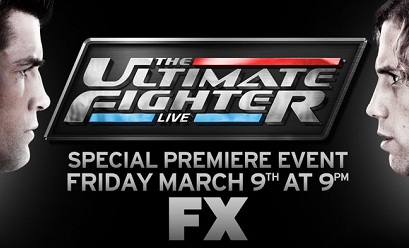 With two UFC on Fox events already complete, along with that deal came the switch of The Ultimate Fighter being on

Spike toFX.  That’s not the only change to the format.  Now, instead of being pre-taped, the season will be live.

FX is coming out swinging also by having the debut episode on Friday, March 9th be 2 ½ hours long.  16 fights will be on as we watch to see who makes it into the house.  Then all 16 fighters live in the same house, training separately as each week the coaches pick one member from each team to fight, with the winner moving on vying for the end prize, a six figure contract into the UFC.

This season will feature the lightweight division.  Current bantamweight champion Dominick Cruz and “The California Kid” Urijah Faber will coach and face off at the end of the season at UFC 148 in July.  This will be the third time the pair has fought as Faber and Cruz have
one win apiece.

The Ultimate Fighter LIVE airs on March 9th, at 9pm ET on FX.