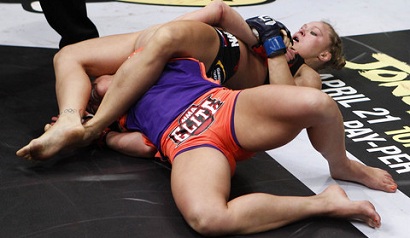 If there are people that still believe that women have no business in MMA, need only to watch last Saturday night’s Strikeforce main event featuring Miesha Tate and Rhonda Rousey.  I guarantee their opinions will change by the end of the fight.

Last July, Tate was the first submit then bantamweight champion Marloes Coenen.  Almost immediately Rousey started pleading her case for the title.  With only four pro fights, most people including Tate though that it was too early Rousey to be campaigning for a title shot.  In Rousey’s defense she was 7-0, winning her last four fights with armbars all under a minute each.

All the trash talk finally became physical before the fights as during the weigh ins, Tate pushed her face into Rousey’s and Rousey pushed back.  The main event started with Tate coming out swinging actually landing a right hook but Rousey showed that her Judo background was nothing to be taken lightly as she took down Tate and put her in an armbar as it looked like Tate’s arm was dislocated.  Tate got to her knees and pulled out of it finding the back of Rousey but not being able to secure the rear naked choke.  Rousey used her elite Judo background again as she hip tossed Tate twice, the second time rolling into another deep armbar.

Tate eventually tapped after what seemed like a lifetime and Rousey took home another arm for her collection and better yet, the Strikeforce Women’s bantamweight title.  “She was much more savvy on the ground than I anticipated,” said Rousey.  “She’s good, and she’s legit, but I don’t feel that bad about the injury,”  Talks have already begun about the first title defense to be against Sarah Kaufman who defeated Alexis Davis earlier on the undercard.