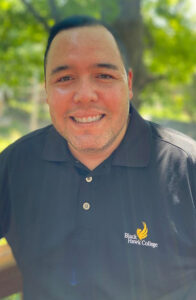 Charlie Ochoa will build the Braves team that will begin competing in Fall 2021.

“I look forward to putting together a competitive program and giving students the opportunity to excel on the field while furthering their career goals,” he said.

“We have so much local talent in our local community that I’m excited for what the future brings to this program.”

Coach Ochoa enjoyed being a student-athlete and says it showed him how to be more responsible and disciplined in the classroom and on the field.

“I expect a lot from my players when it comes to both environments. It’s important to take the skills given from every instructor and coach to be a successful student-athlete,” he said.

“With his lengthy high school coaching experience, we are certain that he will do a great job leading the men’s soccer student-athletes,” Chavera said.

Ochoa has coached the Davenport (IA) West High School boys soccer team since 2018 and will continue to lead the Falcons. He was an assistant boys soccer coach at Assumption High School in Davenport from 2012-17.

Ochoa graduated from Muscatine (IA) High School in 2004. He attended Scott Community College where he played soccer for two years and was an NJCAA All-Conference Goalkeeper Honorable Mention in 2006.

In 2007, he transferred to St. Ambrose University where he played soccer for one year and was a place kicker on the football team his senior year.