An intricate colorful tile mosaic mural depicting the Storm Lake welcome sign was created at Witter Gallery over the past few days to propose a possible larger art installation in The City Beautiful.

“Art is for all people,” she said, describing how public art she and fellow artists created have transformed Zacatlan, Mexico, near Mexico City, into a tourism attraction.

Thousands of square feet of glittering tile murals line the exterior of buildings and walls.

If a similar project were undertaken in The City Beautiful, the Mexican artists would involve community members. While the artists would handle the central figures, citizens could help by filling in backgrounds, preparing tiles and mixing mortar.

The project was instigated by Witter Gallery board member Patricia Hampton, who in a chance meeting with mural project promoter Dick Davis in May, seized upon the idea to bring the muralists to Storm Lake.

Davis was on his way from California to Chicago, promoting Zacatlan’s mosaic mural projects there.

Hampton seized upon the idea of bringing the murals to Storm Lake and organized Mary Carmen’s trip to Storm Lake. Two additional artists were scheduled to accompany her, but they were unable to be cleared for their international flight.

Wednesday’s presentation kicked off with the unveiling of a gift to Art Cullen, a striking portrait of him in tile mosaic. “I was caught stone cold,” said Cullen, “and for once am speechless,” he said upon seeing his likeness.

Mary Carmen and Dick Davis planned to meet with Storm Lake city officials Thursday to discuss the possibilities for an art installation in the community.

She is also meeting with art and Spanish students at Buena Vista University and Storm Lake High School and plans to attend the upcoming Storm Lake Multicultural Festival in Chautauqua Park Saturday.

A second community meeting to explain the project is scheduled for Friday, Sept. 9 at 5:30 p.m. at the gallery. 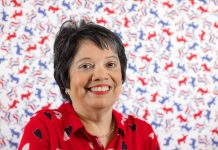