Four people are dead after a single-vehicle accident along the 1800 block of South Sixth Street in Marshalltown late Friday night.

According to a press release from the Marshalltown Police Department, first responders were called to the scene at about 11:12 p.m. on Friday and found a vehicle that had collided with a utility pole. The vehicle was severely damaged and on fire. The victims, all of whom died at the scene, have been identified as 13-year-old Adrian Lara, 16-year-old Isaac Lara, 15-year-old Linette Lopez and 17-year-old Yanitza Lopez, all of Marshalltown. Yanitza Lopez, a high school senior, was crowned the 2022 MHS homecoming queen.

The circumstances of the accident remain under investigation, and the MPD has contacted the Iowa State Patrol for assistance. Marshalltown Police Chief Mike Tupper called the crash “a tragic event that will deeply affect our entire community” and asked that respect be shown with regard to the privacy of the families directly involved.

“Our hearts go out to the Lara and Lopez families. This is a tragedy for our entire community,” Tupper said. “We know the community will stand strong in support of everyone affected. That is the Marshalltown way. Please pray for comfort and peace for all involved.”

The Marshalltown Community School District also issued a press release about the loss of four of its students, calling the events “deeply saddening” and indicating that mental health professionals would be onsite at both the MHS and Miller Middle School libraries to assist students and staff on Sunday from 1 to 3 p.m. and throughout the rest of the week as necessary.

“We ask everyone in the Marshalltown School Community to keep these students’ families in your thoughts, prayers and to respect their privacy during this difficult time,” the release concluded.

A candlelight vigil was held at St. Henry’s Catholic Church Saturday evening, to mourn the loss of the four teens, and at least 200 community members gathered to take solace in each other’s company. During the vigil, candles were lit and Father Alan Dietzenbach offered a few words of comfort to those in attendance, in both Spanish and English.

“What happened last night was an accident. A horrible accident, no one is to blame. Pointed fingers are better spent folded in prayer for the Lopez and Lara families. For us, for their siblings, for their families and our Marshalltown community,” Dietzenbach said.

After the vigil concluded, those in attendance were invited to stay, pray and converse with one another. For those wanting to offer their condolences, paper and pens were available, and these notes were collected to be delivered to the Lopez and Lara Families.

Several local businesses closed their doors on Saturday night as a show of respect and solidarity for the victims and their families, and a memorial to the two sets of siblings has already taken shape at the crash site as of Sunday.

A GoFundMe for the Lopez family was also started by Ruben Rodriguez to help pay for funeral costs. As of Sunday evening, nearly $26,000 has been raised for the Lopez family, and the goal has now been adjusted to $30,000 after surpassing previous goals. To donate, visit https://www.gofundme.com/f/linette-yanitza-lopez?qid=b4b713847c614b2a59bf5ccdd90de382.

Jessica Rundall also organized a GoFundMe for the Lara family to help with funeral expenses. The goal is now $30,000, and as of Sunday evening, over $22,000 has been raised for the Lara family. To donate, visit https://www.gofundme.com/f/funeral-and-memorial-for-isacc-and-adriannono?qid=50828b1d9c7d50f212ff5d895c763926. 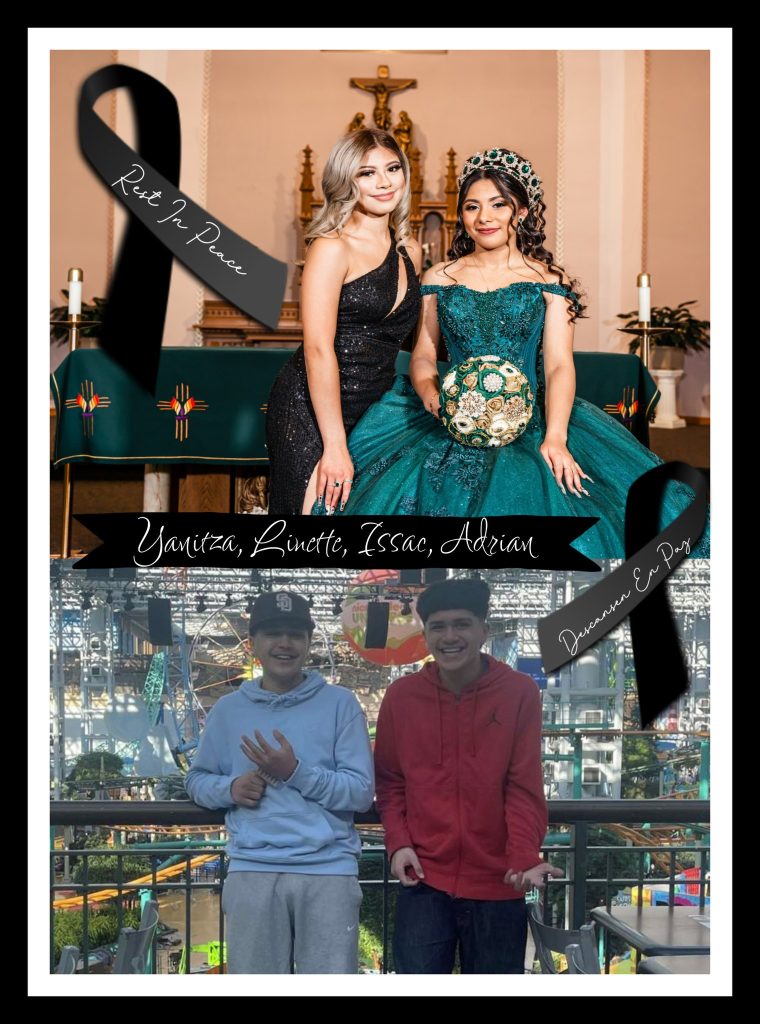