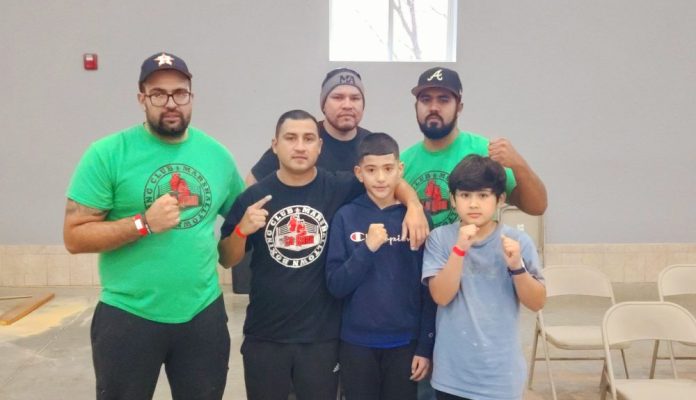 The Marshalltown Boxing Club La Raza, founded just about a year ago, hosted its inaugural boxing event Saturday afternoon at the Midnight Garden, and in addition to a full house of spectators, 13 other clubs from throughout Iowa and the Midwest came out to participate.

The event was originally slated for Sept. 17, but due to unforeseen circumstances, it had to be postponed. Despite this setback, the M-Town Showdown went off without a hitch Saturday. Roberto Gonzalez, Luis Alejandre, Adan Ortiz and Adan Rodriguez co-founded the club, and each of them were excited to see the fights come to fruition.

Gonzalez said they had fighters ranging in age from eight to 21, with some of them having multiple fights, and he felt the event was a great way to showcase their skills and demonstrate all the hard work they’ve put into boxing. 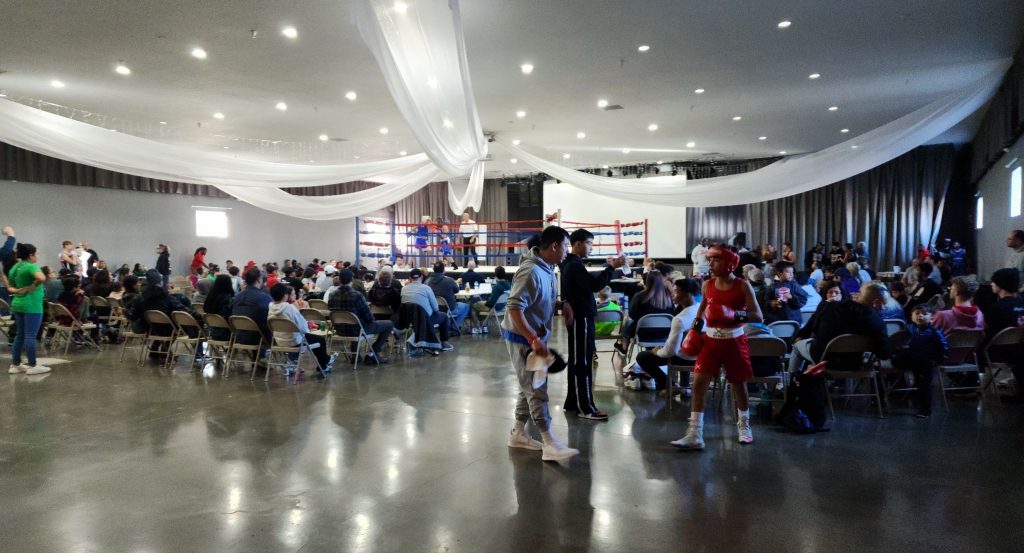 Since the M-Town Showdown was the first big event hosted by La Raza, Gonzalez was also looking forward to promoting the club and getting the word out in the community about what they’re working to achieve.

“We’re here to do a good for our community,” Gonzalez said. “Basically, it’s just keeping kids out of trouble. You know, a lot of kids have issues with anger management, they don’t know how to manage their anger, they like to fight and stuff like that, and boxing teaches them how to calm themselves down and just kind of be themselves. As a kid, the more confidence you’ve got in yourself, you’re off to a better start.”

Rodriguez felt similarly to Gonzalez, and said La Raza was about more than just boxing. It’s about making an impact on kids’ lives and teaching them how to take on the real world with confidence.

“There is a lot that goes into boxing. It’s not about hitting your opponent. There’s a lot of discipline that goes into it, a lot of work that you have to do yourself and it just really helps you in the outside world. What you have in the gym, goes outside in the real world, where you’re bumping into hardships and overcoming them, and knowing how to be disciplined and stay cool and many other things,” Rodriguez said.

Alejandre is the head coach for La Raza, and he couldn’t be happier to see the hard work pay off for everyone involved. He said coaching for the club has been a great experience, and he was looking forward to the matches starting.

“It’s been pretty awesome. I mean, we’re trying to teach the kids about respect and how to defend themselves, how to be disciplined. Guide them (about) good and bad,” Alejandre said. “I’m pretty excited for my kids and the people that support me and the club. I appreciate it. I appreciate every one of them.”

Ortiz, also a coach, was equally excited to watch the matches and see the growth of the club’s athletes in action, but he was also glad to see boxing coming back to Marshalltown. There once was a boxing club hosted out of the Veterans Memorial Coliseum, but since it was disbanded, there was a lull in community boxing until La Raza resurrected it.

“Just bringing it back to Marshalltown, that’s what I’m really excited about. Having everyone watch the hard work that all of the kids have been doing, all the improvement they’ve been doing. I’ve been with the kids since they started, and just seeing that confidence gain, that confidence boost,” Ortiz said. “They’ll lose some matches and they’re down, and they’ll come back and win and see that the hard work actually does pay off.”

One athlete, 11-year-old Alexa Carona, couldn’t wait to get in the ring. She trained hard for the last year to grow her skills and being able to showcase them was exciting. Alexa’s dad, Javier, was glad to be there to support her as well, as he used to box during the days of the old club at the Coliseum in the late ’90s.

Javier said boxing helps Alexa to relieve stress and work off excess energy, and it’s something she enjoys a great deal. She was proud of her progress too and hopes to box professionally one day.

Boxing began at 3 p.m. Before the national anthem was played and the bell was rung to signal the start of the very first round, the organizers asked for a moment of silence in memory of the four Marshalltown teens who passed away the night prior in a fatal car accident — 13-year-old Adrian Lara, 16-year-old Isaac Lara, 15-year-old Linette Lopez and 17-year-old Yanitza Lopez.

After the opening formalities, the boxing began to the delight of the crowd, and fighters were paired up for three-round matches.

All proceeds from the event will go back into La Raza, as the club is a non-profit. They meet Monday through Friday at 1103 W. Lincoln Way, with kids training from 5 to 6 p.m. and adults training from 6 to 7 p.m.