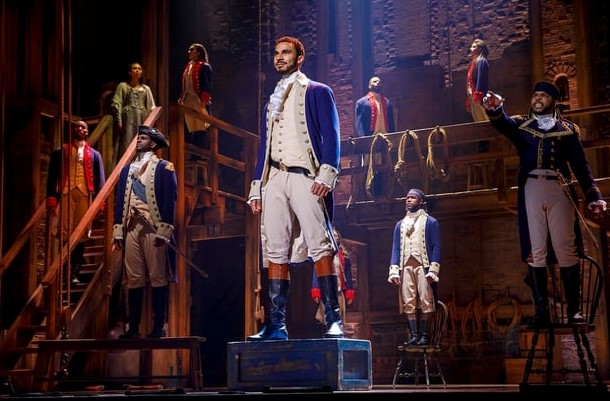 Producer Jeffrey Seller and Des Moines Performing Arts announce today that single tickets for HAMILTON will go on sale to the public on January 24 at 10 am at DMPA.org, in person at the Civic Center Ticket Office or by calling (515) 246-2300. Tickets will be available for performances May 17 – June 5.

Jeffrey Seller notes, “It’s tempting to get tickets any way you can. There are many sites and people who are selling overpriced, and in some cases, fraudulent tickets. For the best seats, the best prices and to eliminate the risk of counterfeit tickets, all purchases for the Des Moines engagement should be made through DMPA.org, in- person or by calling (515) 246-2300.”

HAMILTON is the story of America then, told by America now. Featuring a score that blends hip-hop, jazz, R&B and Broadway, HAMILTON has taken the story of American founding father Alexander Hamilton and created a revolutionary moment in theatre—a musical that has had a profound impact on culture, politics, and education.

With book, music, and lyrics by Lin-Manuel Miranda, direction by Thomas Kail, choreography by Andy Blankenbuehler, and musical supervision and orchestrations by Alex Lacamoire, HAMILTON is based on Ron Chernow’s acclaimed biography. It has won Tony®, Grammy®, and Olivier Awards, the Pulitzer Prize for Drama, and an unprecedented special citation from the Kennedy Center Honors.

The HAMILTON creative team previously collaborated on the Tony Award®-Winning Best Musical In the Heights.

The musical is produced by Jeffrey Seller, Sander Jacobs, Jill Furman and The Public Theater.

For information on HAMILTON, visit:

Des Moines Performing Arts is a private not-for-profit organization celebrating over 40 seasons of presenting the performing arts to Iowa and the surrounding states on four stages in Des Moines – the Civic Center, the Stoner Theater, the Temple Theater and the newly renovated outdoor space, Cowles Commons. Des Moines Performing Arts is a presenter of major Broadway and educational touring companies, performers and groups, and is home to many local and regional groups, including the Des Moines Symphony. All performances of the Broadway Series are supported by Willis Auto Campus. All performances at the Temple Theater are supported by Prairie Meadows. All performances of the Family Series are supported by Wellmark Blue Cross and Blue Shield. For more information, visit DMPA.org.