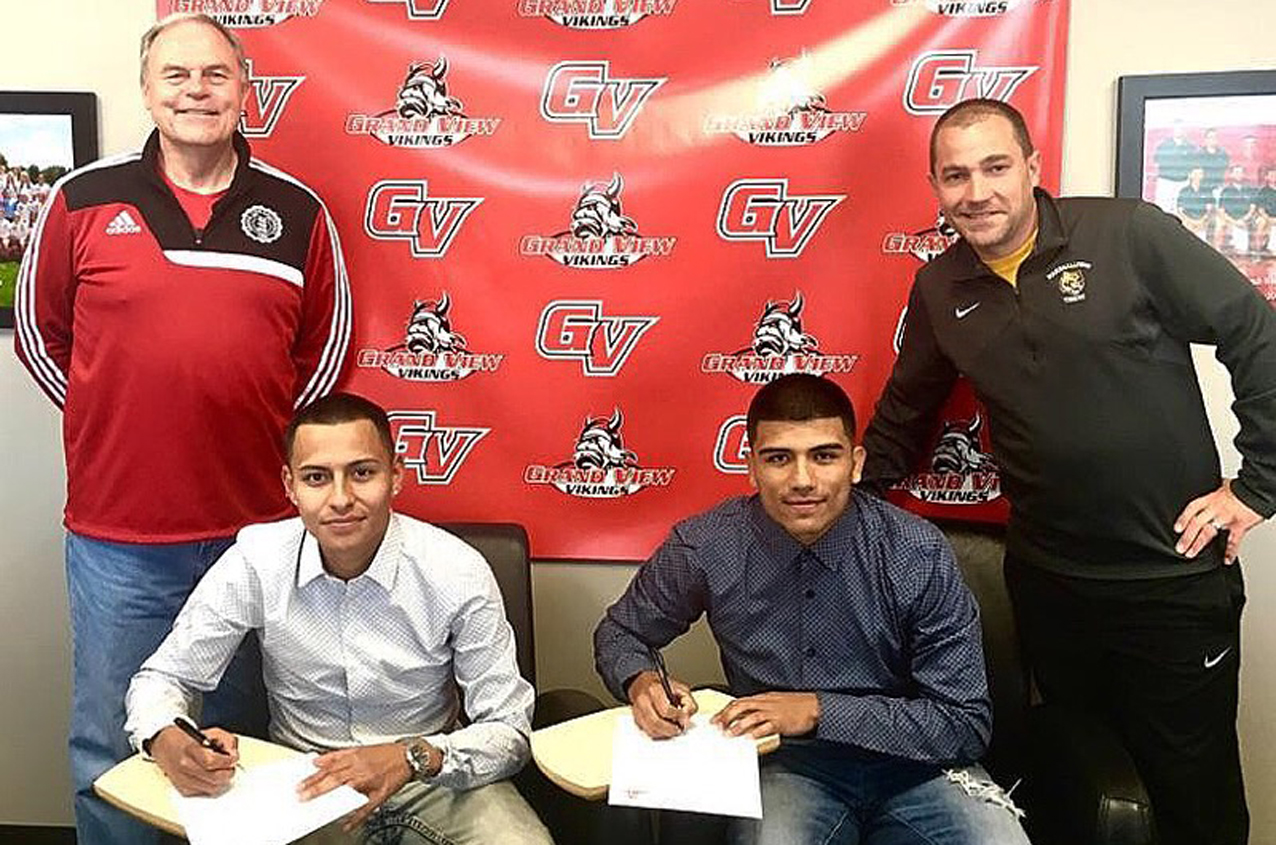 Gomez and Ortiz opted to stay local following their playing career at Marshalltown High School and came to further their soccer skills and education at MCC. After a stellar two years for the Tigers, both players have decided to move on to a nationally prominent program in Grand View.
Since 2010, Grand View, a NAIA institution, has posted a 95-26-7 record for a winning percentage of .770. The team has reached the NAIA National Tournament five times during the stretch.
“We’ve been playing together since we were 12 years old,” Gomez stated in regards to the decision to partner with Ortiz at Grand View. “We understood the potential we had on the field growing up together, and as our careers progressed, we realized it became easier to play alongside each other. We helped push each other over the years and it’s paying off for us now.”
“I’m glad to have Gute (Ortiz) as a teammate still. His excitement and competitiveness he brings to the game is what makes playing with him so fun.”
Ortiz was equally as thrilled to have Gomez join him at Grand View. “It’s always nice having someone like that (Gomez) to be with you in big decisions. It makes things much more comfortable not just having to walk in by yourself. We’ve been playing together for a very long time. We’ve gotten to know each other more as a person and as a player as our careers have gone.”
Both players cited the quality coaching staff, along with the proximity to Marshalltown as primary reasons for choosing the Vikings. “Coach (Blair) Reid and coach (Augie) Gutierrez played a big role in my decision,” Gomez exclaimed. “They were constantly communicating with us. Grand View is a beautiful, small campus and they are competitive on the field every year.”
“I enjoyed how the coaches treated us,” Ortiz added. “They were very in to us from the start. They asked us not just about soccer, but about our families, our academics. They want to know how you are as a person, not just as a soccer player.”
Despite taking their soccer talent away from Marshalltown for the first time in their playing career, both Gomez and Ortiz are proud to have come from the tight-knit soccer community of Marshalltown and see plenty of future success to come from the local soccer scene.
“We’re from Marshalltown,” Gomez stated. “Both Gute and I hope that future players from Marshalltown can see that you don’t have to leave the community to find success. We had two great years at MCC with plenty of local talent.”
“The best part about our two years at MCC,” Ortiz added, “was that we had plenty of local players on the team. It brought the community to our games and gave us a great atmosphere to play in front of. We hope that the younger kids of Marshalltown can look to see what we did here in town and continue to grow the club teams, the high school team, and MCC.”
Gomez and Ortiz cited MCC head coach Rafael Martinez for helping them reach the next level of their playing careers. “Coach Rafa gave us an opportunity and believed in us,” said Gomez. “He pushed us to get better each and every day. I’ve become more aware of the tactics involved in soccer thanks to coach and I’ll be able to carry that with me the rest of my career.”
“Coach Rafa has helped us in so many ways,” Ortiz stated. “Tactically, mentally, he allowed us to get better while at MCC. The entire coaching staff really helped our careers.”
Both players played for MCC assistant coaches Creighton Jenness and Chris Fuchsen at Marshalltown High School before moving on to MCC.
Martinez was pleased to have both players stay local and join the MCC program. “Both Agustin and David are examples of success stories that fuel our program just as much as titles, national recognition, and wins. These two Marshalltown boys have faced tremendous difficulties and challenges throughout their youth, and yet with hard work, determination, and the support of faculty and staff at MCC, they proved that success can be achieved.”
“This goes for academics and athletics,” Martinez continued, “since they have both been key contributors to a program that has no borders when searching for talented and motivated student-athletes. This next step in their lives is just as challenging. Grand View University is a quality academic institution with a nationally recognized soccer program, but I am confident they will continue to positively represent their community, MCC, and our soccer program with excellence and character. I wish them the best, which is what they deserve.”
Ortiz earned NJCAA Division I All-Region XI Second-Team honors both years at MCC and scored six career goals while anchoring one of the top defensive units in the nation during 2015. Gomez was also a two-time NJCAA Division I All-Region XI selection, earning second-team honors as a freshman. Gomez tied for second on the team in 2015 with 23 points and capped his playing career at MCC with 40 career points.
Ortiz plans to study criminal justice while at Grand View. “MCC allowed me to adjust to being a student-athlete at the college level. I’d like to thank Marnie Brown for always being there for me. Even if I had a simple question, she’d be there to help no matter what and that’s exactly what I needed at MCC.”