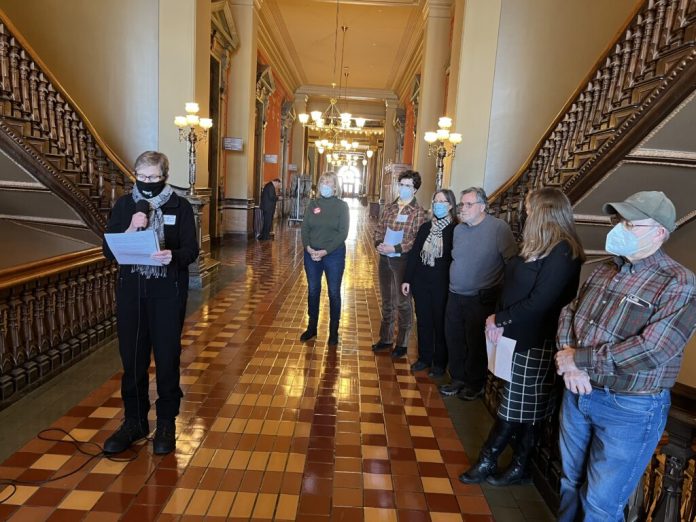 Free press advocates called Wednesday for Iowa Senate Republicans to reverse their decision to bar journalists from the floor of the chamber.

“When news of these restrictions became known, it was an immediate red flag, a threat to the freedom of the press and thus, a threat to our democracy,” Terese Grant, president of the League of Women Voters of Iowa, said Wednesday during a Statehouse news conference.

The League of Women Voters of Iowa and the Interfaith Alliance of Iowa held the event to protest the decision by Senate Republican leaders to move media from their traditional seats on the chamber floor to a third-floor gallery.

“The League of Women Voters wants the press to be able to have direct access to legislators so that all Iowans have the most accurate information about the actions and decisions that are made on a daily basis” in the State Capitol, Grant said.

Connie Ryan, executive director of the Interfaith Alliance of Iowa, said politicians “name calling, belittling and harassing, demonizing and dismissing the free press to further their own agenda ensures the public cannot be fully informed of our government’s work and actions and places our democracy in danger.”

Iowa Capitol Press Association President Erin Murphy of the Cedar Rapids Gazette emphasized that journalists are not courting conflict with lawmakers but merely trying to restore access necessary to do their jobs.

“It’s about accountability. When we’re on the floor, those lawmakers are accountable to us, and by extension to the people of Iowa. And we’re then accountable to them, they can come up to us if they have a concern about a story, an issue that they want to speak about,” Murphy said.

A spokesman for the Senate Republican leaders did not immediately return an email seeking comment. Senate Majority Leader Jack Whitver, R-Ankeny, has cited difficulty in defining “media” for the purpose of assigning limited space in the chamber.

“There’s only 12 to 14 seats on the Senate floor,” Whitver said last week, according to WOI-TV. “As you try to define who is media. Is it TV? Is it radio? Is it newspapers? Is it bloggers? Is it podcasters? There’s a lot more people trying to access those 12 seats.”

The Iowa House has seated journalists on the chamber floor but have refused credentials to several bloggers or newsletter producers.