It’s late afternoon and the two fighters are working together in the hot confines of the Alley Cat Boxing Club in Moline, Ill.

One boxer, Gilbert Venegas, 45, Davenport, is holding up mitts, moving inside the boxing ring while his son, Gilbert Venegas Jr., 28, Davenport, throws his punches at the mitts – jabs, right hands, left hooks. The punches create a loud popping sound upon impact.

Sweat breaks out on both father and son, the temperature inside the ring seeming to rise as the younger fighter continues his assault on the mitts, picking up the beat, a rhythm both seem to understand without instruction. The timer outside the ring ropes goes off, a loud buzzer indicating 30 seconds left in the round.

There is a brief interlude of rest before the work starts all over again. Father and son boxing combinations may not be unique. They have been around for as long as the sport has existed. Some are successful, some are not.

But, it’s rare that a father, who is still an active fighter, trains his son. For the Venegas team, it’s a deal they’ve learned to grow with through their careers. Boxing has been a bond for the two. In the coming weeks, that bond will be tested.

Gilbert Jr. (11-1, 7 kos) is scheduled to fight Aug. 20 in Hollywood, Fla., on a Showtime card. He will face undefeated Fiodor Czerkaszyn (19-0, 12 kos) in an eight-round match. The Ukranian-born Czerkaszyn lives in Poland.

After a recent workout with his son, the elder Venegas spoke about why he is still fighting at age 45, taking on young up-and-comers, winning and losing, but giving a good show for the fans. He has been fighting professional since 1999.

Like his son, the father is still chasing a dream, albeit one that may be a long shot at best. Surely, time has eroded some of his skills that only youth can claim a right to. But, he trains, running and sparring, taking each fight as another potential chance to achieve a big win. The big win that could lead to something.

He’s an optimist, always searching for that opportunity.

“I have a passion for it,” the father says. “I believe in myself. It’s something that’s a part of my life. I’m more like a gatekeeper. I make it hard for my opponents. I’m blessed. I still believe I’ve got that one breakthrough fight. So, God be on my side, I stay healthy.”

The younger Venegas received the call for his big fight in early July. He hasn’t fought in over two years. In the meantime, he has been working out off and on, sparring with some of the local pros and amateurs in the area, working out at the Alley Cat gym run by coach Jeff Perez, but never having a set date for another bout, until now.

“I don’t want an opponent where it’s a tune up,” Venegas Jr. says. “I’m already 28 years old. I want to test the limits and risks. That’s what life is all about. Taking the risks. I have a family life, and I’m working. That’s why I’m going hard in boxing. It gives me another goal. For once in my life, I’m sacrificing it all. Giving it a good shot. Hopefully, it will change my life, and I can do what I love.”

The elder Venegas will be in his son’s corner on Aug. 20. He understands pace and distance, when to jab, when to feint. There’s no style he hasn’t faced in both the amateur and professional ranks. His son hopes to put that knowledge to good use.

“I’m so proud of him,” Venegas Jr. says of his father. “I think he’s coming to the realization that he’s about to be done fighting. He’s going to end up being my coach for sure. That’s what I want to happen. But, yeah, he’s still giving these young cats my age a go. He’s fighting prospects and making exciting fights. He’s a warrior.”

The bell rings inside the gym. The workouts continue. The whack of the gloves thud on the leather heavy bags, pounding out a potential path of future opportunities.

Father and son work together here, not always in perfect harmony. Even so, the bond is solid, each trying to carve out paths in a hard sport.

“In the gym sometimes, we bump heads,” the elder Venegas admits. “You know, I just have to play the role as the coach, not the father. I tell junior, ‘you’ve got to believe in me.’”

“I’ve got to trust my corner’s eyes,” Venegas Jr. says. “He sees things I don’t see. And come prepared. Don’t disrespect the game. Be ready.” 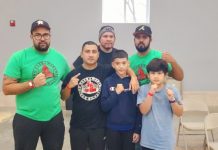 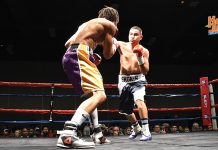 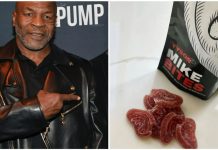