Helio Castroneves is one of the most popular and successful race car drivers in history. He has spent the last 16 years as part of the Team Penske in the IndyCar series of racing. He is the only active driver to have earned the distinction of being a three-time winner of the Indianapolis 500. He will be coming back to the Iowa Speedway in Newtown, IA to compete in the Iowa Corn 300 race on Sunday July 10.
Castroneves has another unique distinction he is the only race car driver to win a championship on the popular TV show “Dancing with the Stars”. He won the Mirror Ball trophy in 2007 and in 2012 he was asked again to participate in their Dancing with the Stars: All-star season with celebrities that had previously participated in the show.
When asked what people recognize him for the most he was quick to answer, “definitely Dancing with the Stars. Especially the flight attendants they always want to dance with me.” 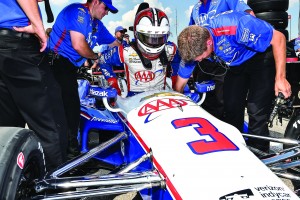 Castroneves is a great competitor with the passion and desire to achieve more in life and on the race track.
After his latest race, he moved to second place on the standings. Although, he has never won an IndyCar series championship, he has come close many times. Castroneves has come in second 4 times in his career and finished on the top 5 on 11 of his 16 seasons competing in this series.
Is this the year for Helio to win his first IndyCar championship?
“I think I’m in a very good position to do that.” Castroneves said. “We gotta keep pushing. I feel we have a very good chance to win the championship and if I don’t, hopefully, one of my teammates will,” he humbly added.
Penske team drivers are 1, 2 and 3 in the standings. Obviously, there has to be rivalry between the team members.
“All the time,” he said confirming our suspicions. “We push each other and I think that is the beauty of our team. We push in a way that we want to make sure that we do well, that the whole team does well. But we do have a healthy competition and we also feed from each other learn from each other and today we are 1,2 and 3 because of that.”
On July 10, Helio Castroneves will compete at the Iowa Corn 300. The Iowa Speedway is one of the few Oval tracks on this year’s Verizon IndyCar Series.
“The ovals are very good. I think [it] is a great race, especially in Iowa. We’ve been second there before, but I’ve never won there yet. Hopefully, we can crack the victory lane this year. I hope everyone in the audience has a good time in Iowa,” Castroneves told us.

We asked him what was more important for him now at this point in his career, to win an IndyCar series a championship or to win a record tying 4th Indy 500.
“The championship is something that I haven’t done yet, but to be part of history you need to do something even bigger than that and there’s no question for me that winning the Indy 500 a fourth time would be a great deal,” Castroneves told us. “This year we were very close, really, really very close and at the end we had wing damage by another driver but you know that is racing and hopefully next year we can bring that.”
He’s had an illustrious career in racing and we asked him how many more seasons he thinks he has in him and what drives his passion
“Hopefully many more seasons I don’t have a number to be honest. I want to keep going,” Castroneves said. “What drives my passion is that it is the Human being versus Machine, when you start to understand what the machine is telling you what to do just wow that is fantastic I mean it is… It is the best feeling in the world and that is what makes me keep going because you are always learning. That is what drives my passion.”
To finish on the high note we wanted to know, when all is said and done and Helio Castroneves retires how would he like people to remember him by.
He paused for a bit then answered, “good question. I want people to remember that I definitely loved what I did. I pushed to the limit. I want people to remember me for what I’ve done in the past, but I still hopefully will give them more reasons for them to remember me by in the future.”
Come out to see Helio Castroneves compete at the Iowa Corn 300 at the Iowa Speedway in Newton, IA on July 10.